Moms on the Move 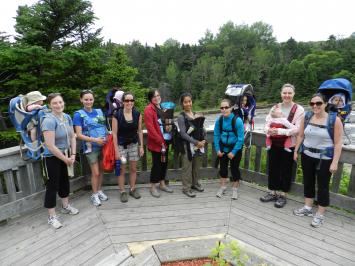 "You better not be trying to squeeze out a poop."

"Everybody ready? Alright...let's take a hike."

Trailing behind these eight young women on a muggy, yet pleasant day in July, you'd probably think they are like any other hikers who enjoy getting out into the great outdoors. But once you get a glance of the tiny, 10-pound bundles strapped protectively to their chests, snoozing and cooing contentedly, you'll soon realize that this isn't any ordinary hiking group.

The Outdoor Mamas is the brainchild of cousins and best friends Ashley Russell and Lesley Reid, both 32. Having known each other since they were in diapers themselves, the Conception Bay South natives have shared many experiences over the years - everything from family gatherings and a three-month backpacking trip across Europe in 2002, to camping trips with their husbands. They even run their own business together, Bellies and Bundles, a hip maternity and baby boutique that specializes in natural, environmentally friendly products. Now they get to share a whole new adventure - motherhood.

Since June, they have been gathering up their babies - along with their diaper bags, pacifiers and receiving blankets - and getting together with other new moms to enjoy each other's company along the walking and hiking trails around St. John's and surrounding areas.

"Lesley has a little girl (Lyla) who's 11 months old...and she was taking her little girl snowshoeing and cross-country skiing and trying to get like-minded moms to do the same thing, but it's a bit harder to get it started in the winter. So we tried again in May and it was amazing how fast it grew," Ashley says.

Currently, the Outdoor Mamas has about 101 members and while they aren't all active members, Ashley says they usually have a good turnout for their hikes, with babies ranging from just a few weeks to a little over a year old. Just about every week, new moms and little bouncing bundles show up.

"As long as it's not icy, then we can continue to hike and then snowshoe once the snow's deep enough. I don't really anticipate that the group will have the same numbers each week when the winter comes," Ashley chuckles.

"I think that maybe at first people were a little bit intimidated by it. But the trails are fairly flat that we're doing and we're only going for an hour to two hours. And if moms need to have a nursing or a feeding break, then we'll all have a little break, or a little group will have a break, so it works out well."

Take a hike
Today's trek of choice is the majestic Manuels River trail in Conception Bay South (for more on this trail, turn to page xx) and even for those who aren't as athletically inclined as these spry young women, it's a fairly easy jaunt.

Dressed in comfy black pants and sneakers, her grey t-shirt matching the headband that sweeps the blond hair from her bright blue eyes, Ashley is in her element. Her four-month-old daughter Adia, strapped comfortably to her front in a bright red baby carrier, also seems quite content; but once Ashley stands still, Adia lets out a little cry, as if to say, "Let's get movin', Mama!" (While Lesley and her daughter Lyla usually attend the hikes, they couldn't make this one.)

Once the ladies descend the steps to the trail, a quiet hush and sense of peace seems to wash over their little ones like magic. Like their moms, it's clear they're most comfortable wrapped in the loving arms of Mother Nature.

"Babies benefit so much from the fresh air. A lot of them nap while we're hiking," Ashley says.

The moms, some of them new to the group, chat about everything under the sun, from the best baby carriers to their favourite hiking spots around the province and elsewhere. For them, the Outdoor Mamas gives them a chance to introduce their babies to an activity they love, while spending quality time with other women who share similar interests.

"Lesley and I are always together. We have babies that are quite different in age though, when you look at it. So I'm really happy to meet new moms who I can continue to do this with when she goes back to work," Ashley says. (Besides running their own business, Lesley is an environmental engineer while Ashley is a marketing and public education officer with the Multi Materials Stewardship Board (MMSB). Both are on maternity leave at the moment.)

"And a lot of other moms in the area, whether they're from Newfoundland or not, have never been on some of the trails that we've been taking them on, so it's been fun for us to see other people enjoy these new trails, too."

Trudy Blackwood, a new convert, found out about the Outdoor Mamas through a friend on Facebook. Her first born, Anna (who recently celebrated her first birthday), peeps out curiously from the carrier on her mother's back, her wide eyes catching the sight of a mama duck and five fuzzy ducklings serenely sailing along the river.

"I think (the group is) great just for the social aspect of it...Sometimes it's hard to get motivated, and to get out on your own and go for a hike is not always the safest either. So to find others with the same interests and get exercise, it's great."

This is the fourth or fifth hike that Valerie Piercey and her nine-month-old daughter Kyla have shared with the Outdoor Mamas, and judging from the way Kyla is gleefully cooing, this definitely won't be their last.

"I think it's wonderful because you get outside, you can exercise, which is really hard for new moms. It's nice to meet people too...every hike I've met somebody new."

For Lesley (who Downhome caught up with over the phone), this is what the Outdoor Mamas are all about - nature, nurture, fun and fellowship.

"I love meeting people who are of the same mindset and who are interested in exploring new things with their baby and not just staying home all the time. And plus the babies love it. Lyla is so much happier outside doing things as opposed to just sitting inside playing with toys all day long. She really loves being outside and I think all babies are probably the same," she says.