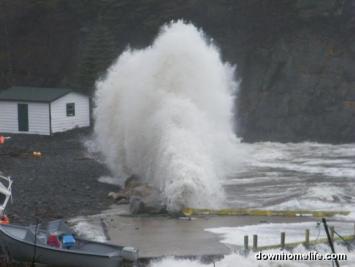 Taken in Bauline East by Ashley Blackler
As nasty as it can be, Mother Nature's wrath can make for a pretty awesome photo shoot. With heaving seas and ominous skies, a frightening forecast can turn into a dramatic photographer's backdrop. Take some time to marvel at the top 10 wild weather photos sent in by our readers - and the next time a storm's a brewin', don't just hide under the covers; grab your camera and start shooting...from a safe distance, of course.

Clinging to the Cliffs A storm about to break in Musgrave Harbour, Newfoundland at sunset. (Submitted by Barry Lambert) Hurricane Igor at its peak in Mobile, on Newfoundland's southern shore. (Submitted by Cynthia Power) Hail in Bowmanville, Ontario in June 2011. (Submitted by Violet Wells) The government wharf in Winterton, Newfoundland took a hit during the hurricane. (Submitted by Steph Piercey) An old home in Boswarlos, Newfoundland was all but finished off by a winter blizzard. (Submitted by Tom Eagan) Hurricane Igor tore through this road in Princeton, Newfoundland as if it were a sheet of paper. (Submitted by R. Ivany) "Summer 2010, high winds drove the fresh waters crazy with three-four foot lops on Benton Pond, as Greg George drives his lightweight aluminum boat alone trying to get up the pond to go home. The wind catches under the boat at the same time he came off a lop and stuck the boat up straight and turned him around to face the direction he came from," writes submitter Barry Lambert.

I recognize that Boswarlos house, or what's left of it. It looked old 30 years ago, and I always thought how beautiful it must have been when it was first built.