Between Love and a Hard Place 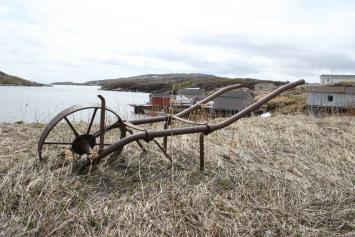 The plane rumbles down the gravel strip and lifts into the cool Labrador air as I watch from the edge of the runway with my camera. Like the snipping of an umbilical cord, when the tires lose contact with the soil an immediate sense of aloneness sweeps over me.

Beside the green square box that serves as the air terminal, George Russell is waiting on his four-wheel ATV to give me a ride into the community. I hop on and we descend the dusty hill. Around a long turn, past the diesel power-generating plant, the tiny town of William's Harbour unfolds in front of us. The grey dirt streets weave around the little houses like a discarded snakeskin. George pulls up next to a bungalow perched neatly on a bald rock. The wind, still cold in early June, whips around us as we hurry inside.

"There's not much happening here today," says George, a smile of sarcasm across his face as he goes about organizing the day's mail on his kitchen counter. George is one of two caretakers of the diesel plant, but also doubles as the mailman. "Want a cup of tea?" he asks as he divided up copies of the Northern Pen newspaper and grocery store flyers.

I'm in William's Harbour, on the south side of Granby Island, to write a story about the Golden Cod Festival - an annual event that brings the community alive each summer - but I soon realize that the story is deeper and wider than the rare species of fish for which it is named. It's as much about the contrasting emotions of trying to remain in a coastal Labrador community where the population of 17 people is more realistically hovering around 11 or 12 on any given day. The youngest male resident of William's Harbour is 60 years old, and the youngest wife is about 57. One child remains and she is 18.

"It's all old timers here. To haul up a boat or launch a boat here takes you forever because there's no one here to give you a hand anymore," George says. "In a couple of years it'll be a summer town. Every year there's someone taking off for the winter. After a while, if something ever happened to someone in a community there wouldn't be enough people left to put them on a stretcher and bring them up to the plane." George Russell outside his home in William's Harbour

George says there's something dismal about living here these days. There is a sadness in him as he watches his community slowly dwindle into oblivion. But it's clear that George is conflicted in his thoughts. His comments go back and forth from how survival is getting more and more difficult, to how peaceful it is and how the closeness to nature is soul-soothing.

Changing times
He says the community is two different places, depending on the season. During the summer, while the ferry is running and the plane is more consistent, people don't get the feeling of being stuck on the island. But in winter, when transportation is at the mercy of the weather, people are trapped. George says the gap in transportation is even wider in recent years because global warming is impacting the tide levels and the frost.

"A couple of years back we were caught for 19 days with no plane," he explains. The foggy weather settled in and no one could get in and out. And the hard frost needed to freeze the tide-riddled waters around the island hasn't been coming until later in the winter, which means they couldn't access the mainland by snowmobile like they were used to doing.

"If you're going somewhere then, by God, you've got your fingers crossed. The weather might be down and the plane wouldn't get in. The same thing trying to get back."

In addition to travel concerns, George says there's not much to stay around for nowadays. The town's only source of income was quashed with the moratorium. The fishery closed and the doors of the fish plant along with it. The island is barren of wood and people now have to get their firewood brought in by ferry.

But the rivers are still teeming with char. Sea ducks are as plentiful as ever. There are seals and rabbits to be had.

There used to be a dart league in William's Harbour with 40 members. The population peaked at about 105 at one time and the school once housed 40 students. But the school closed last year and the last two students now attend school in Port Hope Simpson.

"Right now there's not a big lot to stay around here for," says George. "I'm planning on retiring soon, so I'll only come back here in the summer time. The winters are too harsh here now." He says that a few years back when the idea of resettlement was being bantered about, government was offering $90,000 per household to abandon the community, but only half the people found it an acceptable offer.

Hope is not lost. George says that if the government would build a bridge to the mainland and then a short road into the South Labrador Highway, the island could survive. It would be the lifeline needed to allow people in and out at will.

The golden cod
Amid the uncertainty of the town's future there is a bright spot; a yellow brick road smattered with footprints of anticipation and expectation. The Golden Cod Festival is a time of renewal, a chance for people to remember the good times and celebrate their attachment to the community.

The golden cod has become a symbol for what William's Harbour has meant to those who live there. It's a rare species of fish found only in Gilbert Bay. At first glance, it looks identical to the northern cod, except for its golden colour.
"You ever see one? Boy, he is golden," says George. "It's a different species according to the scientists that have come down here. They figure they don't often go outside (the mouth of the bay). It's a dandy cod."

According to George, even though they didn't call it the golden cod, the fish has been around for as long as he can remember. "We'd be out jigging years ago and if we were ever going to boil up out on the jigging ground, that's the one we would take. They were always fat." He says eventually DFO got wind of how different the fish were and since then, those fish have become off limits. The section of Gilbert Bay where the golden cod exist is now a marine protected area and fishing is forbidden.

In recognition of the unique fish, the town launched the Golden Cod Festival a decade ago. It started out as a two-day event but has since dropped back to a single day. There is live music and dancing, and crafts and food for sale - all an opportunity to raise a few extra dollars to cover the town's operating expenses. It triples the population for a day or two as people pour in from neighbouring communities.

But George says the festival, like the community itself, is fading away. "This could be our last year for it by sound of it. You've got to have a lot of volunteers for this stuff and right now there's no one here."

As I take the last swallows of my third cup of tea and wind up my conversation with George, I get the sense that the will to face the hardships of living in William's Harbour is slowly breaking down as people get older. As communities around them gradually escape their isolation because of access by new roads, the feeling of desperation grows stronger in William's Harbour.

It's going quiet in George's cozy living room. He glances at his watch and suggests we head back to the airport because the plane is on its way back for me.

As we mount the quad and head back over the winding street, I realize the aloneness I had felt earlier has been replaced by serenity. There is an inexplicable peace and relaxation surrounding the community, even in the dusk of its probable demise.

At the airport we meet up with Alton Russell (pictured below), the 65-year-old airport maintenance worker. I chat with him while waiting for the plane, and get the same message I'd gotten from George.

tells me a bit about his life: how's he's worked since he was a boy; received Employment Insurance as a 13-year-old fisherman; went back to school to train as a heavy equipment operator; worked away but eventually returned to William's Harbour; and how his wife Margaret would be "smiling from ear to ear," if she could leave for good.

"My life is like a dream. It seems so short when you think back," he says almost to himself. After a long pause, he adds, "Some good and some bad. Like a dream."