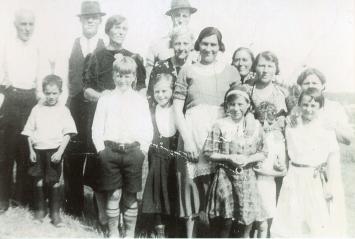 Ida House-Davis poses with her extended family circa 1939. Ida is the little girl in the centre.
By Linda Greenfield (as told by Ida House-Davis)

Sitting with my mother (finally at home after five months in hospital), I recalled a friend's advice to ask my parents about as much family history as possible because when they are gone, so is that history. If not researched, important family happenings would be lost forever. For some reason, at this time, an old memory of my mother's words came to mind. Years ago Mom had told me that during WWII a German submarine had surfaced at their wharf in Port Saunders, Newfoundland. How is it I never pressed her for more details about this fascinating story? This time, I asked her to tell me everything about it. Her memories were clear as she thought back to 1939, when she was 10 years old. A recent photo of Ida House-Davis

This is what she recounted.

In 1939, Port Saunders had a population of about 200 people. The only access to this little fishing community was by sea. No roads to anywhere else existed there at that time. Electricity and indoor plumbing didn't even make an appearance here until about 1962. So in 1939, when the sun went down on this seaside village - it was truly dark outside!

As WWII began, locals often saw Allied convoy ships in daylight sailing across the Gulf. My mother said they could see that our ships would often put up smoke screens to hide their exact location from enemy vessels. When the convoys were around, the residents were aware that German submarines could also be around.

Port Saunders has a very deep harbour where submarines could navigate with ease. The harbour provided shelter from storms - and from attack. When villagers saw the convoys they would black out their windows, hiding their kerosene lamplight, and warned everyone to stay away from the docks. This warning was made especially clear to the children. My mother says she remembers one particularly nervous father screeching at his children to get inside and put the curtains down. My grandfather had said, "Dare's Bill off 'is 'ed agin to-noite." She said Bill's voice carried over the water for all to hear adding drama, and some humour, for his audience.

While these episodes struck fear into the hearts of knowing adults, it only served to fuel a sense of adventure to a group of mischievous 10-year-olds.
My mother and her wee gang of village children promised their parents they would stay away as warned, but no sooner out the door, they went directly to the wharf. My mother said she was one of the ringleaders egging the others on. This is hard for me to imagine as she is a shy, quiet woman as an adult. Hearing this was a little like the scene from the movie Back To The Future, where the son thrown back in time is surprised to find that his mother was so rebellious as a youth!

Mom and the pack of 10- year-old rascals were off to the wharf. Sure enough, as hoped, a strange submarine was there under cover of night. Suddenly the hatch opened. One might liken the moment to a scene from a movie where earthlings wait with bated breath for the door of a spaceship to open, revealing inner aliens! Out of the inky blackness a number of men stepped out from the "alien" ship onto the wharf and motioned the children over.

My mother says she remembers that they were very kind and friendly with warm smiles. The fearless little band accepted the invitation into the ship and walked downward into the submarine.

At this point in the recollection, my father, who'd never really ever heard this story in its entirety either, interjected that it must have been an Allied submarine. My mother, protesting, said she had a very clear memory of the sub's grey walls painted with small white swastikas, not to mention the German accents.

The men took the children into the galley and offered them anything they wanted from a table of oranges, chocolates and many treats. Living in a remote northern village, these children had never even seen an orange before. Mom said their eyes were big as saucers at the wonders they saw within, the engine room being especially awesome. The men took them all through the sub and then returned them up the staircase and onto the wharf. My mother said one man with clear blue eyes took her on his lap, kissed her on the side of her blond head and said, "Sweet little girl." In halting English, he spoke of his family back home. Perhaps there was another little blond-haired girl there he was thinking of. The men then escorted all the children to the shore, making sure they got off the wharf safely, and waved goodbye.

These men represented a brutal regime. Perhaps those at sea were not so aware of what was happening back home. Perhaps the wicked goals of the Nazis were not fully developed in the minds of German troops at sea in the beginning of war in 1939. Perhaps they were drafted without a choice in the matter. One can only speculate about the mindset of men no longer on the earth.

What I do know is that on one moonless night in 1939, men of war set aside The Third Reich, and were kind to a handful of curious Newfoundland children. Many Nazis let the concrete of hatred seal off their heart's humanity. But that night, green grass grew up through the concrete and these men demonstrated one of the finest universal truths about decent human beings everywhere - the love of children.