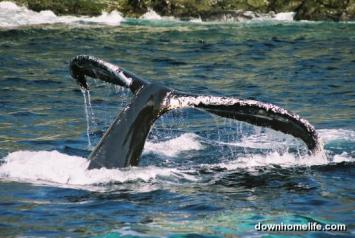 Arlene of Chesley, Ontario sent in this image of a humpback whale tail she captured on camera a couple of years ago.
Planning to hit the wide-open ocean around Newfoundland and Labrador? Keep your eyes peeled - and cameras poised - for whales, dolphins and porpoises that travel in the North Atlantic Ocean each year. Here is a handy guide to many of the majestic, elusive creatures of the deep, that'll help you decipher exactly who you might meet during your travels on the sea.

40-tonne, 40-foot, relatively slow-moving creatures are easily identifiable because of the alligator-like bumps on the front of their heads. Humpbacks, which number about 10,000 in the Northwest Atlantic region, usually provide great entertainment for boat tour passengers. A typical humpback will frequently breach, dive with its tail in the air and slap the water's surface with its flippers and tail. Although tourists may enjoy humpbacks, many fishermen regard them as nuisances. Humpbacks become entangled in fishing gear around Newfoundland and Labrador more than any other whale species. "While out whale watching in Bay Bulls in a small open boat, this curious whale decided to try to get to know us a little more than we were comfortable with! As I was curled up in a ball, screaming, my boyfriend managed to capture a smile from the humpback before he nudged the boat and swam off," writes reader Patti Butt.

no more than 30 feet in length, and weighing in at six to seven tonnes, minkes (pronounced MING-KEY) are the smallest baleen whale (whales that use baleen - comb-like plates - instead of teeth to filter food). They can be identified by their markings: mostly grey with white bands around each flipper. They are fast swimmers and either travel alone or in small pods of two to three. (Humpbacks, blue and fin whales are also baleen whales.) 70- to 80-foot, 70-tonne fin whale is second only to the blue whale in size. They range from brown to bluish-grey, with a whitish colour gracing the right side of their mouths. Fin whales usually feed on fish and plankton by skimming the surface of the water, and are sometimes referred to as the "greyhound of the sea" because of their speed (up to 40 km/hr).

name "killer whale" is deceiving for a couple of reasons. First, killer whales are actually dolphins (which are members of the whale family). And second, their murderous name comes from their hunting of other whales - not for any danger they pose to humans. Also called orcas, these creatures' characteristic black-and-white markings, shark-like dorsal fin - and with a little help from the popular movie Free Willy - make them unmistakeable. Want to find out why these creatures earned the name "killer"? Click here to read the story of a tour guide who witnessed a brutal attack by killer whales in Witless Bay, Newfoundland in August 2010.

80 feet long and weighing more than 100 tonnes, the mighty blue whale is the largest animal on earth. It is so massive, in fact, that its heart is about the size of a small car. According to Whale Release and Strandings, a non-profit organization based in St. Philip's, Newfoundland, they can be seen alone or in groups of two or three along the edge of pack ice on the west and southwest coast of Newfoundland.

pure, white colour of the beluga whale (also, appropriately, called the "white whale"), makes it stand out. The 15-foot, 3,000-lb beluga has a flexible neck that allows its head to turn in all directions. It lacks a dorsal fin, which allows it to swim beneath ice with ease. Belugas are very social animals, travelling in pods consisting of an average of 10 whales. During migration, however, they may travel in much larger groups numbering in the thousands. Belugas are known as toothed whales, but their teeth are not for chewing - instead, they use their teeth for grabbing prey, which they often swallow whole. (Other examples of toothed whales include killer and pilot whales, dolphins and porpoises.) Reader Carolyn Piercey sent in this photo of a beluga whale getting up close and personal.

pilot whale is commonly referred to as the "pothead" or "blackfish" in Newfoundland and Labrador, where it was hunted for its meat up until 1972. Almost always found in groups, pilot whales are very playful and vocal. Adult males measure up to 20 feet in length and weigh up to 6,000 lbs, while females are slightly smaller. They are black in colour and have long, narrow flippers.

in Newfoundland and Labrador as the "puffin pig" or "puff pig," the harbour porpoise is one of the smallest members of the cetacean (whale) family at approximately five feet in length and weighing 120 lbs. The harbour porpoise ranges from dark grey to black above, with white below. Reader Sherry Rodgers sent in this photo of a pod of harbour porpoises in Conception Bay, Newfoundland. "Oh what a show they put off for us," she writes.

larger dolphins are most often seen in large groups of up to 50 - and occasionally numbering several hundred. They often follow boats and enjoy riding the bow wave (the wave that forms at the bow of a ship while moving through the water). They have short beaks that are white on top, while the remainder of their bodies are typically grey with a light-grey or white stripe.

Atlantic white-sided dolphin usually travels in large groups, and apart from a black beak and slightly smaller size, it is very similar in appearance to the white-beaked dolphin. Its main source of food includes shrimp, squid, herring and other small fish.