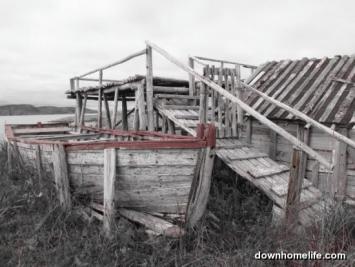 We're at the height of tourist season in Newfoundland and Labrador. Thousands flock here every summer, many in search of the quintessential, quaint outports where the people are so friendly and the fishing wharves make such pretty pictures. Do the tourists wonder why there are no boats tied to some of those wharves? Why there's no fishing gear on the stages? Why the gentleman who takes time to explain the role of the fishery in rural Newfoundland is not out in his own boat, taking part in the activity he speaks so passionately about? In some small towns, the museums and signboards interpreting fishing history outnumber the boats that still participate in it.

Those who still carry on the trade, who continue to bet their lives and livelihoods on the sea, are becoming increasingly disillusioned and frustrated with the course of the industry - in particular, with the government-laid path that they're forced to follow. In recent decades, they have watched fishing stocks dwindle right alongside community populations as more and more people are forced out of the fishery and out of the province for reliable work and family security. Under federal rule and required to abide by the decisions of the Department of Fisheries and Oceans (DFO), many fishers feel helpless as their repeated outcries for better science, better management and fairer practices seem to go unheeded.

Recently one fisherman decided to take things up a notch. He's asking people across the country to sign a petition that, among other things, demands the dismantling of DFO.

"The reason I started this petition was because of the injustice that has been done to the fish harvesters in Newfoundland by DFO," says John Gillett, who's been fishing out of Twillingate, Notre Dame Bay for 40 years. He says he's talked to fish harvesters around the province and across the country who feel the same way about DFO as he does.

John accuses DFO of not using discretion when investigating fishery violations and forcing unnecessary court actions, not having a groundfish stock recovery plan and having a lack of science on fish stocks.

"The bureaucrats in Newfoundland and Labrador and Ottawa are not open to new ideas on fishing or letting harvesters fish underutilized species. This is because they have so many rules that they have themselves boxed in and can't make a decision one way or another," John says. "The key to the problem with the fishery, in my opinion, is there are too many fish harvesters for the amount of quota. If there was good science it may be different." He says the quotas set by DFO are, in a lot of cases, too small for harvesters to make a living.

"Government needs to bring in a new fisheries act and start anew; get away from the Ottawa bureaucrats; take away the absolute power from the Ministry of Fisheries for Canada."

John hopes that the petition will convince federal politicians to launch a public inquiry into DFO's fisheries management and consider replacing DFO's current structure with one that "takes into account fishery science with an emphasis on serving the fisher people who make a living from the industry," the petition states.

It's pretty clear why fish harvesters would support such a petition as they have the most to benefit from its success. But why should anyone outside the fishery feel compelled to get involved? John has a good answer for that.

Sign on and help save rural Newfoundland!
Download the petition. Print a copy on standard letter-sized white paper and get as many signatures as you can. (Petition rules say only signatures on the lined side of the sheet count, so don't let extra signatures overflow to the blank back of the sheet. Print another form.) Mail your completed petition to MP Scott Simms, House of Commons, Ottawa, ON, K1A 0A6 by August 1, 2011. (Postage to MPs is free.)