Wild Day at the Beach 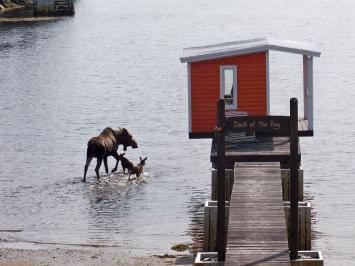 For reader Donna Rice it truly was a wild May 24th weekend. The property surrounding her cabin in Bear Cove, White Bay, Newfoundland played host to a cow moose and her two young. When Donna noticed the family of moose running up her neighbour's driveway, she grabbed her camera immediately.

"The mother lead her babies around our fishing stage and down the beach. They took a short walk up a hill and when the babies had a difficult time climbing, their mother came back to them and continued up the hill," writes Donna. "They then changed direction and headed back to the beach and along the rocks. I'm guessing the babies were only a day or so old as they were staggering and very wobbly as they ran. They would tire easily so their mother stopped frequently to give them a rest and feed them. They stayed on the beach all afternoon resting near the rocks as their mother looked on."

And here's how the afternoon unfolded: Fantastic pictures Donna. A once in a lifetime experience. Gloria Mercer. Calgary, AB.