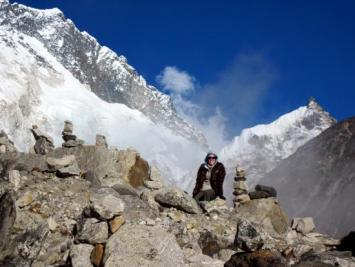 At 16, 830 feet, Michelle Boyer of Saint John, New Brunswick found a beautiful backdrop for a photo while trekking in Nepal's Everest Region.
In the June 2011 issue we brought you eight amazing mountaintop views in Newfoundland. And while our readers have a true appreciation for Newfoundland scenery and exploring, they are also world travellers! Here are more stunning views that were worth the climb for our readers, taken both near and far. Reader Jane Smith of Ottawa, Ontario was even above the clouds at 10,000 feet up on the Haleakala volcano, located on the island of Maui, Hawaii. While working on Canada's north warning system for the Nasittuq Corporation, reader Kristin Simms of Happy Valley-Goose Bay, Labrador made it to the Kiglapait mountains in northern Labrador.

Downhome in the Adirondacks John Higdon of Ottawa, Ontario (formerly from New Harbour, Newfoundland) made the trek up Mount Jo in the heart of New York's Adirondack Mountains. During this trip, John and the group he was travelling with stayed at Magic Pines Campground, coincidentally run by Newfoundlanders! (Photo courtesy of Mark Penney.)

The View From Red Rocks Reader Dave Dominie of Lower Sackville, Nova Scotia says this photo was taken from the top of "Red Rocks," just outside Port aux Basques, Newfoundland. From this vantage point, he took in awesome views of the Table Mountains and the Codroy Valley. Siblings Ryan and Miranda of St. Alban's, Newfoundland share a peaceful moment at the top of Foley Mountain in Westport, Ontario. (Photo courtesy of Paulette Buffett.) "In April of 2010 myself and three other Newfoundlanders accompanied TA Loeffler and trekked into Mount Everest Base Camp (17, 598 feet). This picture was taken from on Kala Patar - a peak which offers a fantastic view of Mount Everest," says reader Natelle Tulk of St. John's, Newfoundland.

Reaching for the Stars This group of young hikers made it to the top of the Starlight Trail in Newfoundland's Codroy Valley - now to get back down! (Photo courtesy of Sheri MacIsaac.) "My husband Rodney and three of his co-workers travelled to Fort Collins, Colorado for work, and their spouses joined them for a holiday. While in Colorado, all enjoyed one day high in the Rocky Mountains taking in the stunning scenery. Enclosed is a picture of our group at about 12,000 feet and if you look closely, you will see we have our Downhome magazine," writes Yvette Kendall. "We hiked up Gros Morne Mountain in July 2010. Took this shot of Judy overlooking the gorge." (Photo courtesy of Judy Hillier.)

Do you have a stunning mountaintop photo? Click here to submit.