Give Before You Go 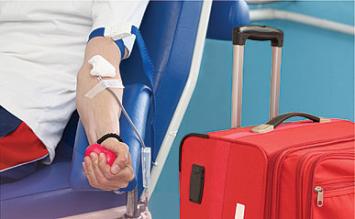 Canadian Blood Services is asking all Canadians to add blood donation to their vacation checklists this year, because summer tends to be a time when blood donations decrease.

"People get busy, they're away on vacation, they're busy with family commitments," says Sharon Bala, communications specialist for Canadian Blood Services. "The other thing that happens is that people go on vacations to Mexico or parts of the Dominican Republic where malaria is an issue, and then when they come back they get deferred. (A trip to an area identified as a malaria-risk zone makes an individual ineligible to donate blood for one year.) So what we tell people is, give before you go."

Likewise, Sharon adds, if you don't live near one of Canadian Blood Services' clinics, and you plan to travel to an area where there is one, consider making blood donation (which takes about an hour) part of your travel plans.

Why donate?
Regular blood donors have their own reasons why they donate. Some roll up their sleeves because they watched their parents do it before them, while others are inspired by loved ones who needed blood at one time. For Calvin Taylor of Kelligrews, Newfoundland, it's about a sense of community.

a quiet way to give to people, especially to people you don't know," says Calvin. The 66-year-old has been quietly giving for nearly 50 years - to the tune of 525 blood donations. Since he retired from teaching 12 years ago, he's been averaging 35-40 donations every year. (At left, Calvin is pictured giving his 500th blood donation.)

None of his loved ones has ever been in need of blood, but it's a cause he feels strongly about nonetheless.

"If I'm driving along the road and somebody's broke down, I stop and help for the simple reason that they have somewhere to go...and money can't buy what they want," says Calvin. He sees blood donation in the same light. "Helping people out through the journey of life is all it is," he says.

Donating plasma is what has allowed Calvin to reach such an astonishing number of donations. While whole blood donors can choose to donate every 56 days, those who donate blood products - plasma or platelets - are eligible to give the gift of life every six and 14 days, respectively.

To ensure it is safe for Calvin and other frequent donors to donate so often, Canadian Blood Services requires a visit with the organization's doctor once a year.

"We are very careful about safety, for the recipient but also for the donor," says Sharon.

"Whole blood donors can only give every 56 days. By that time, their bodies will have replaced the blood they donated...Plasma and platelet donors can give more frequently because we only take their plasma or platelets and their bodies can replenish what they give much more quickly."

Calvin is more than happy that he has been able to give so often. After all, he says, "Who knows when you will be in need and who's going to help you?"

Giving and receiving
Richard Walsh, 56, of Chamberlains, Newfoundland (originally from Bay de Verde) knows what it feels like to be both a donor and a recipient.

Growing up, Richard (who's donated blood 67 times and counting) recalls his father donating blood faithfully whenever called upon.

they'd do a clinic in Old Perlican, they'd call him and he would go over and donate blood if he wasn't out fishing, my father was a fisherman, and every now and then he'd go to the mail and there'd be a pin or a 25th donation certificate and he'd come home and show me," remembers Richard. It was his father's commitment to the cause that inspired Richard to become a blood donor. And although his father, Lawrence P. Walsh, has since passed away, Richard still carries on the tradition of giving - not only on his dad's behalf, but for those individuals who find themselves at the mercy of strangers. (At left, Richard is pictured with some of his blood donor memorabilia he's collected over the years, just like his father did.)

But little did Richard know, one day he would be the one in need.

In 2000, Richard (who's been donating blood regularly for about 25 years) was 46 years old, a husband and a father to two young daughters, when an upper GI bleed meant he needed to receive blood to survive. Richard remembers that fearful time like it was yesterday.

"I would throw up and then my stomach would fill up again and I'd throw up...and they couldn't get (the blood) into me fast enough," he says. "My family were called in from mainland Canada, from Ontario and places, because it was so touch and go...I made my peace. It was a scary time."

Richard underwent surgery to fix the source of the bleeding, an ulcer that had attached to a blood vessel - and from the time he arrived at the hospital until he was wheeled into the recovery room, about 20 units of blood had been pumped into his body. That means 20 strangers had to walk through the doors of Canadian Blood Services to help save Richard's life.

Though he's been an avid blood donor since his early 30s, Richard says the thought that he might one day require blood never crossed his mind. And his own experience receiving the gift of life has given him a new perspective on blood donation.

"Giving blood is a way to make a difference to anyone from a tiny infant in a neonatal intensive care unit to an elderly individual needing that vital surgery for one last chance at life - and to think that you could be part of that 'one last chance' every time you donate," says Richard, adding, "Look at me. I am alive today because some people - strangers - took an hour of their time to give the gift of life, my life. Thank you, thank you, thank you."