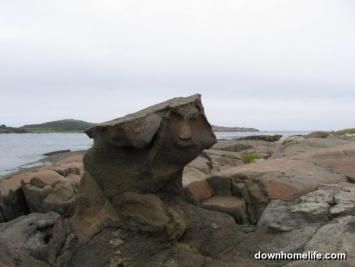 Sean Moores photo
We might not have Stonehenge, but "the Rock" has plenty of incredible rock and cliff formations that'll catch your eye. Some of them are downright uncanny, like the clearly visible face in this rock (pictured, right) located on Sandy Cove Beach on Fogo Island. Here are 14 more freaky rock formations from around Newfoundland. Visit Keels on the Bonavista Peninsula and walk in the "devil's hoofprints." (Alvin Mouland photo.) Take a walk along the Gravels Walking Trail in Port au Port West and marvel at these odd rock formations. (Barbara Mercer photo.) This rock formation in Brooklyn, Bonavista Bay is referred to as Coaker's Hat - in honour of William Coaker, who founded the Fisherman's Protective Union in 1908. (Anna Arnold photo.) Watch out for "the lion" in Nipper's Harbour on the Baie Verte Peninsula. (Gord Brown photo.) This formation, found near Carbonear, brings new meaning to the term, "the Rock!" (Chris Ricker photo.) This Newfoundland dog spends its days looking out over the water in Hare Bay, Bonavista Bay. (Jessie White photo.) While taking a drive on the Baccalieu Trail, pull over in Perry's Cove and admire the Sphynx. (Pam Rose photo.) Look up onto the cliffs surrounding Western Brook Pond in Gros Morne National Park and you might just see a character from the Wizard of Oz: the Tin Man. (Jan Boone photo.) Locals say they can see the profile of Queen Victoria in this rock formation, found at Crow Head, Twillingate. (Janette Lambert photo.) Old Man in the Mountain Last but not least is the old man in the mountain, located east of Corner Brook. Perhaps Newfoundland's most well-known rock formation, the cranky-looking character is said to be guarding treasure buried on Shellbird Island in the Humber River. (Wayne Loveys photo.)

Do you know of a freaky rock formation? Snap a photo and send it in! Click here to submit.