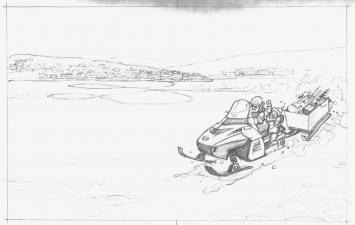 A sketch from Give Me Back My Dad!
By Linda Browne


Once upon a time, in a little town in a very Big Land far away, there was a little girl who loved going on adventures. One cold winter's day, a very special visitor came to town - a storyteller with a big heart who was beloved for his wild and wonderful tales that made children all over the world laugh and smile. The storyteller, named Bob, also loved adventures and decided to go ice fishing with the girl and her dad. Soaking socks and freezing feet aside, Bob had so much fun that he made up a silly story about the ice fishing trip. Eventually, Bob had to go back home and while many years passed, he never forgot the girl, her dad or his big adventure. At last, his silly story turned into a book and he went back to that little town excited to share it with everyone, especially the girl. Even though that little girl was now a lovely young woman, with two little girls of her own, she also never forgot about Bob or their big adventure...and his story still made her laugh and smile.

They say that truth is stranger than fiction. This is something that Rigolet, Labrador-native Cheryl Allen knows quite well.

Cheryl was 10 years old and her father, Roger Shiwak, was a teacher at Northern Lights Academy in Rigolet when they got wind that bestselling author and "Canada's King of Kidlit" Robert Munsch (who goes by "Bob" in his personal life) was coming to visit schools in the area.

"We knew of him and when we found out that he was coming, everybody was pretty excited," says Cheryl, now living in Happy Valley-Goose Bay. "We met him because my dad was a life skills teacher at the time, and that's how we came about taking Robert out fishing...he wanted to go somewhere on Ski-Doo, so I got to tag along."

With Robert and his son Andrew in tow, Cheryl and her dad made the trek to their cabin at Double Mer, just north of Rigolet. Once there, they put up a large, cotton tent with spruce branches lining the bottom and placed a portable stove inside. After enjoying a day of ice fishing (check out Robert Munsch's journal entry for more), the crew headed back to camp and piled into the toasty warm tent where they entertained each other with stories and jokes. It was in this cozy setting that Robert made up the story "Ice Fishing," inspired by his two new friends.

"After we got home from the fishing trip, I remember there was a big assembly or something in the school and he told it then in the school. I was pretty excited then. I remember after he left he sent a copy (of the story) home to my dad," Cheryl says.

Fast forward 20 years later. Cheryl, now 30, is browsing the web when one of her Facebook friends shares a link to the Pick-A-Munsch contest on Scholastic Canada's website, where three different story outlines have been posted, each inspired by a child/family Robert has met. Cheryl is ecstatic when she finds the ice fishing story among the lot and that Rigolet is one of three contenders vying for the ultimate prize: a chance to have a Robert Munsch book set in their community.

Because she didn't expect Rigolet to win (the other locations were Fort McMurray, Alberta and Brussels, Ontario, which have much larger populations and more voting power), Cheryl was shocked when she heard the outcome. After 170,000 votes from fans all over the country, Rigolet was ultimately crowned champion of the contest.

"Everyone in the community was voting and letting everyone know about the contest. The local CBC Radio Morning Show in Goose Bay did a story on it and reminded people throughout the contest to vote," Cheryl says.

Since December, Robert has been working with his editor and illustrator/long-time collaborator Michael Martchenko to fine-tune the story and transform "Ice Fishing" into Give Me Back My Dad!, Robert's 55th book overall and his 30th with Scholastic Canada, his publisher for the past 14 years.

This month, Robert and Cheryl will be reunited when he comes to Rigolet to officially launch the book.

"Robert is looking forward to returning to the community of Rigolet. He, (illustrator) Michael Martchenko and Scholastic have been overwhelmed by the response from Labrador," says Denise Anderson, director of marketing and publicity for Scholastic Canada, who will be accompanying Robert on his trip. "I hope readers enjoy Give Me Back My Dad! as much as we've enjoyed having readers participate in choosing the story to be published." (Robert wasn't available for an interview as of press time.)

While Cheryl, Rigolet and indeed the whole province is jazzed about Robert's upcoming visit, perhaps nobody is as excited as Cheryl's oldest daughter Megan, 8 (her youngest, Caylee, is 21 months). Megan is a huge Robert Munsch fan who was delighted to learn that her mother was the star of his latest book.

"She was pretty excited, telling all her friends at school and stuff. We have a lot of Robert Munsch books, so she was getting them out and showing them off to her classmates, because we have some autographed books that he sent me after he went home," Cheryl says.

"She brought home a book the other day, I think it's the autobiography of Robert Munsch, that she has in her school. So she brought that home and she was reading it and finding out more about him.

"We're anxiously waiting to go and meet him again. It's going to be very exciting."

And you can be sure they all lived happily ever after.

Click here to keep tabs on the making of the book, called Give Me Back My Dad!
MORE ARTICLES