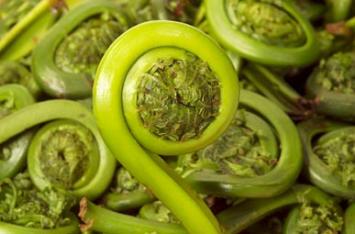 Health Canada is reminding Canadians of the importance of properly cooking fresh fiddleheads before eating them.

Fiddleheads are the curled, edible shoots of the ostrich fern. They are collected along the banks of rivers and streams and sold as a seasonal vegetable at farmer's markets, roadside stands and in some grocery stores.

There have been cases of illnesses in Canada and the U.S. associated with eating raw or undercooked fiddleheads. Studies to date have not determined the cause of these illnesses.

Fiddleheads should never be eaten raw. Prior to consumption, Health Canada recommends removing as much of the brown husk as possible from the fiddleheads. Fresh fiddleheads should then be washed in several changes of clean, cold water. Then cook them in boiling water for 15 minutes or steam them for 10 to 12 minutes. The water used for boiling or steaming fiddleheads should be discarded. Fiddleheads should also be boiled or steamed prior to sautéing, frying or baking. Due to their short growing season, many people freeze fiddleheads. Be sure to use the same cooking methods outlined above when preparing fiddleheads that have been frozen. Preserving fiddleheads with a pressure canner is not recommended, as safe process times have not been established for home-preserved fiddleheads.

Symptoms of illness usually begin 30 minutes to 12 hours after eating raw or undercooked fiddleheads and may include diarrhea, nausea, vomiting, abdominal cramps and headaches. Illness generally lasts less than 24 hours and can result in dehydration, particularly among the elderly and in infants. There have been no reported cases of illness connected with eating fully cooked fiddleheads.

Anyone experiencing the above symptoms after consuming fiddleheads should seek the advice of a health care professional and contact their local public health unit.

It is estimated that there are approximately 11 million cases of food-related illnesses in Canada every year. Many of these illnesses could be prevented by following proper food handling and preparation techniques.