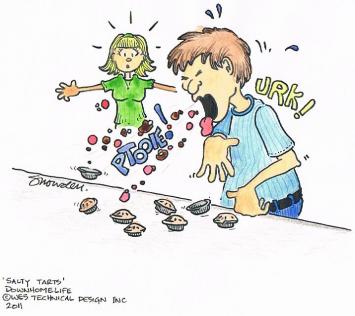 
While my friend Pat and I picked cranberries in the fall, I kept telling her about this great recipe for Mock Cherry Pie I had made when I lived in P.E.I. So when I went home that day, I was determined to make the pie for Pat and her husband.

First I had to make a syrup with sugar and water. I found a clear plastic bag of sugar in the cupboard and measured out the amount in the recipe, and added it to a pot of water on the stove. When the water boiled, I added the cranberries and raisins. I noticed that the sugar hadn't dissolved yet, but thought little of it as I made my piecrust and prepared it in tart pans. I added cornstarch to thicken the cranberry mixture. As I was stirring, it occurred to me that it was taking longer than normal to cook and there was a white coating on the surface, but again I pushed it to the back of my mind.

I cooled the jam and bottled it, then my daughter Ann and I took the bottles and pan of uncooked tart shells to Pat's. All she had to do was scoop some cranberry mixture into each tart and bake them for 15-20 minutes at 350°F. Then I returned home because I had a Mock Cherry Pie in the oven for my family. Just as I was serving a piece of pie to my husband, the phone rang.

It was Ann, who had stayed at Pat's house. I heard her say "What the-" just as my husband took a bite of pie and immediately spit it out with an exclamation of disgust.

Ann could hear him and she began to laugh. She said they got the same reaction at Pat's house when her husband tried my tarts.

Turned out that clear bag in the cupboard didn't contain sugar - it was salt!