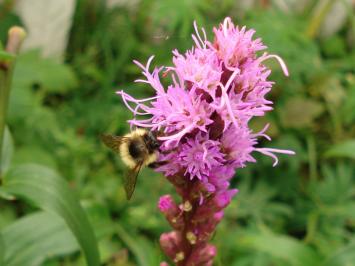 Angela Saint photo
In the April 2011 issue, we delve into the world of bees, their importance to global food and the factors that threaten their existence. Here are some more interesting facts about bees, coupled with the most bee-autiful photos of these hardworking insects sent in by Downhome readers. • May 29 has been voted the Day of the Honeybee by 64 cities and towns in Canada. The City of Saskatoon, Saskatchewan was the first municipal government in the world to sign a proclamation declaring May 29, 2010 as the first annual Day of the Honeybee. Beekeepers and others celebrated by attending a film jubilee featuring guest speakers, a documentary and a showing of Bee Movie. • Honey is referred to as the "ethical sweetener" because it takes the least amount of energy to produce (compared with other sweet treats) and is environmentally friendly. • Honeybees use their fancy footwork to communicate with each other. They do a dance (which explains distance and direction) to alert other bees as to where nectar and pollen is located. • It takes 556 worker bees to gather one pound of honey • The average life of a honeybee during the working season is about six weeks.

• Bumblebees are the only bees native to this province. Honeybees are not even native to North America; they were introduced from Europe for honey production in the early 1600s. • There are no honeybee beekeeping operations in Labrador. If you see a bee in Labrador, it's likely a bumblebee. • Bumblebees are usually bigger and fuzzier than honeybees. • Bumblebees have a smooth stinger and can sting multiple times; honeybees have a barb (or hook) at the end of their stingers, so they can only sting once.