All Shook Up in Stephenville 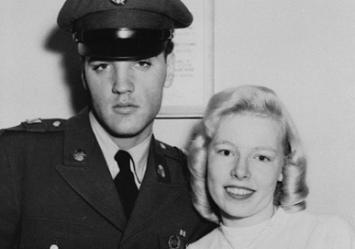 Harriet McCullers (nee Eastus) poses with Elvis Presley, the King of Rock and Roll, during his stopover at Ernest Harmon Air Force Base in Stephenville, Newfoundland on March 2, 1960.
By Linda Browne

From 1941 until its closure in 1966, Ernest Harmon Air Force Base (AFB) in Stephenville, Newfoundland was a centre of significance. The largest U.S. air force base outside of the continental United States at the time, Harmon brought unprecedented economic prosperity and recognition to the Town of Stephenville during those 25 years. It also attracted some of the era's most famous faces - including, according to several sources, blonde bombshell Lana Turner and crooner Frank Sinatra - who visited the base on their way to entertain troops overseas. But perhaps nothing caused as much fanfare as the day "the King," Elvis Presley, landed in Harmon on March 2, 1960.

There was a flurry of activity and excitement in the wee hours of the morning as word of Presley's visit made its way around the base. While this wasn't his first time here - Presley reportedly stopped by the terminal to sing a few tunes in 1954 - and even though he wouldn't be performing, dozens of adoring fans still scrambled out of bed to try and catch a glimpse of the star. Presley was on his way home from Germany to the United States where he would be honourably discharged with the rank of sergeant a few days later. Around 2 a.m., his plane touched down in Harmon for a refuelling stop.

According to a clipping from NCO News sent to Downhome by Frank Trice of Woodlawn, Tennessee, "The performer-turned-sergeant freely passed out autographs and kisses to his admirers but declined all requests for a song."

One of the luckiest fans was Harriet (Eastus) McCullers (pictured), who swooned when "the swivel-hipped sergeant planted his first 'welcoming' kiss on her cheek."

What was it like getting kissed by the King? Downhome tracked down Harriet to find out.

Kiss and Tell
Harriet's neigbour, MSgt. A.C. Bryson, NCOIC of the base information office, knew Presley was coming to town. He also knew that Harriet was a member of the Elvis Presley fan club.

"So that's why I got to go in that room," says Harriet, speaking over the phone in January 2011 from her home in Lubbock, Texas.

Besides Harriet and A.C. - who managed to record a short interview with Presley for ARFS radio - the only other people in the room at the terminal were the DJ from the air force radio station (Rod), a photographer, two APs and, of course, Presley himself.

"He did go out for a few minutes. There was a group of teenagers from the base. I don't remember any of the Newfoundland kids being there, just air force kids...because word just sort of got around that he was going to be on that flight. And he did go out and sign some autographs."

Harriet says Presley was most interested in hearing about what kids did for fun around the base and in Stephenville.

"He said, 'What do you kids do here?' We had a grand teen club on the base, and it was open for us after school, and it was open in the evenings on Friday and Saturday nights. And we had live bands sometimes, and most of the time we just played records. But I told him about our teen club, and he asked about what kind of music we were listening to," she remembers.

Presley might have hung around and chatted longer had other pressing matters not come up. "He said, 'I have to go to the bathroom,'" Harriet remembers with a laugh. "He left and went to the bathroom, and by then it was time for them to get back on that plane and leave."

Even though it was 51 years ago, Harriet says the details of that day are crystal clear.

"That was very exciting, because I've always adored him. In fact, this weekend (January 8) was his birthday. I kept going, gosh, it's hard to believe he would've been 76," she says.

So how did the other kids react when she told them she not only met and talked with, but also smooched, the teen idol?

While the newspaper says Harriet "became the envy of her peers," her friends delighted in hearing the story.

"Kids were different than they are today. And we were a small group of kids that went to school together, we lived in the same housing areas together, and we all spent time at teen club together, so we were a pretty close-knit group," she says.

Harriet (whose father, Harry Eastus, was a sergeant in the air force) spent three years in Stephenville and says she has fond memories of those days.

"One of our friends...his father had a bar at Stephenville Crossing, and it was a huge bar, and on Sunday night he opened it for the teenagers...and he had a dance floor that was as big as a skating rink," she remembers.

"We talk about Newfoundland a lot because we had such a good time there...Nobody worried about us, we walked all over the place, late at night, coming back and forth from town to the base. It was a good place."