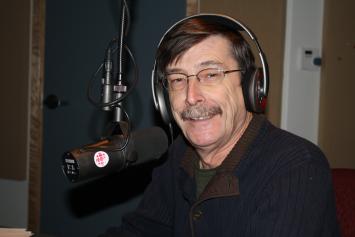 
Here in Newfoundland and Labrador, CBC's "Fisheries Broadcast" isn't just a radio show, it's a cultural institution. Since its first broadcast on March 5, 1951, the show has been vital not only in keeping fishery stakeholders in the loop about everything from marine weather forecasts to the latest controversies and developments in the industry, but also in helping maintain an important part of our history and heritage for the past 60 years. And for people like Wilfred Bartlett, Dwight Spence and Marion Counsel, it's obvious that even though the fishery has faced some major changes, the "Broadcast" remains just as relevant as ever.

Stuck in the Middle
Anyone who regularly reads the "Opinions" section of the newspaper or listens to the local call-in radio shows knows the name Capt. Wilfred Bartlett. The retired fishing captain and sealer from Brighton, Notre Dame Bay has never been one to shy away from sharing his opinion on everything from local politics to the state of rural Newfoundland. When it comes to the fishery, however, he is especially passionate, and as a man who has spent more than three decades on the ocean, it's a subject he knows a thing or two about.

"My motto has always been (that) I want to leave for my children and grandchildren and great-grandchildren what my grandfather left for me. Because when I was growing up, we had a healthy fishery, we had a healthy forestry, and we took what we needed back then. We didn't take what we wanted, we took what we needed to survive. And until we get back to that, I don't think we're going to have a very healthy province, in my opinion."

Wilfred says the "Fisheries Broadcast," which he's been listening to ever since he started fishing, is his lifeline to the industry and is as much a part of his daily routine as having breakfast.

Besides being a dedicated listener of the "Broadcast," Wilfred has often called in to offer his own comments and criticisms. In the late 1970s-early '80s he found himself smack dab in the middle of one of the stories when then host Wilf Dyke came to Brighton to interview him during the seal fishery.

"Just after he got here, I got a call that one of the boats from Triton was out there stuck in the ice," Wilfred remembers.

With his 60-foot longliner and Wilf along for the ride, Wilfred set out to try and rescue the crew by towing them in. Shortly, a Coast Guard icebreaker arrived to assist them into port.

"He came in alongside and he put her in reverse, or up and out ahead...to push the ice away from us...and all of a sudden, with that big thrust in power from this icebreaker, Wilf Dyke almost lost his leg because the rope come across, the rope between my boat and the other one that we had in tow."

"We struck a snowstorm on the way in," Wilfred recalls with a laugh. After spending the night in a hotel room chair, poor Wilf eventually made it home.

"It was an experience for him, I think, because at least he realized more now what happens on the ocean, or what could happen."

Keeping Connected
For fisherman Dwight Spence, the sea is something that's very much in his blood. Hailing from Port au Choix, the "fishing capital of Western Newfoundland," on the Great Northern Peninsula, he started fishing with his father when he was 15 years old. He says while he's noticed changes in the industry over the years, the "Fisheries Broadcast" is one of those constants in life that he's always been able to depend upon.

"I can guarantee it's helped me a lot and we would be lost if anything happened to it. It's part of our culture, it's part of us in Newfoundland... and it's a part of the fishing industry, and that's the main thing," he says. "It's something that you look forward to every evening, five days a week."

Tuning into the "Broadcast" has been a daily ritual since he began fishing 45 years ago.

"My father always listened to it. Mostly those times it was for the weather forecast...the weather forecast was a godsend...then the interviews, the people, what was going on in the fishery around the island. That's why it was so important. That was the main topic growing up in the household," he says.

While Dwight says you can get a weather report anywhere nowadays, the "Broadcast" plays a vital role in keeping him connected to what's happening in the fishing industry, both the good and the bad.

"Sometimes it's not to your liking this day and age, but you hear stuff about the fishery and the seal hunt and that, you get upset about it. It's not much like it was one time...go back 35, 40 years, it was all good news..."

From the latest on what's happening with the crab, shrimp and cod stocks, to the price of fish and what the quota for the season will be, Dwight says "you'll hear it all on the 'Fisheries Broadcast.'

"'Cause it's always somebody telling a story, or somebody complaining about something," he says with a laugh.

A Silent Witness
Growing up on Red Island, Placentia Bay, Marion Counsel's family may not have had many modern conveniences like a television set, but they did have a radio to keep them in tune with what was happening outside their tiny outport community. Marion has many warm memories of those days (before the residents were resettled by the government in the 1960s), and says the "Fisheries Broadcast" played a big part. Her father, Michael Counsel, was a fisherman who used to listen to the "Broadcast" daily.

The second youngest of eight children, Marion says the "Broadcast" was such an important fixture in her home that it was almost like a member of the family. And rest assured, no matter what was going on at the time, a blanket of silence would descend upon the Counsel household every evening at 5:30.

"(It was) a sacred time in our house. When the 'Fisheries Broadcast' was on, you had to be 'quiet for your father,'" Marion says with a laugh. "And, of course, the radio just had a battery. There was no plug in radios at the time (and) we had kerosene lamps. So they had to spare the battery for my father, because of the forecast and the 'Fisheries Broadcast.' We weren't allowed to turn it on and listen to any music...if we were going to sing out or play, we had to go outside," she adds.

"The 'Fisheries Broadcast,' in particular, had a very strong point of meaning within our kitchen. It was a typical outport kitchen; the stove was the central heating for the house and Mom was always bustling around, cooking and feeding the stove and baking, while Dad was curled up on the couch listening to the 'Fisheries Broadcast.' And we weren't allowed to make a sound."

While her parents have since passed and even though she doesn't work in the industry herself (she's a nurse), Marion still has a keen interest in the fishery and listens to the "Broadcast" whenever she can.

"It's kind of ingrained in me, it's in my bloodstream...It's important to me, what's going on in the fishery. It kills me the fact that it's been almost 20 years now of a moratorium. We've lost a whole generation of young people who could've been on the water...but that was so different from back then. It's certainly changing and it's painful the way it's changing so drastically. So the 'Fisheries Broadcast' kind of keeps me in touch with what's going on, even though it's not my life today,' she says.

"It's a great program. And it's lasted such a long time that, in itself, it is a cultural icon."
MORE ARTICLES
load more