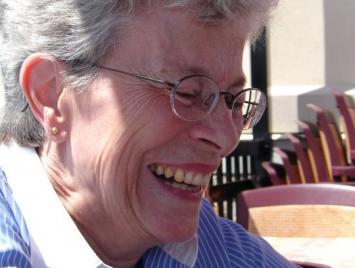 
It was a sunny day in May 2005 when Mom broke the news that she had ALS. My mother, Sandra Matthews, had just celebrated her 65th birthday. She volunteered, took exercise classes, had just moved into a new apartment, and enjoyed socializing with many friends and family. She cared deeply about her children and, above all, had the most beautiful smile.

Several months before her diagnosis, Mom started to trip a lot - while getting off the bus, or just while walking down the street. Mom, who never ever complained about things, started off by going to her family doctor, who sent her to specialists, who sent her for tests. The moment Mom received her diagnosis, she knew life would never be the same.

What ALS means
ALS (Amyotrophic Lateral Sclerosis) is better known as Lou Gehrig's disease - a rapidly progressive and fatal neuromuscular disease characterized by degeneration of a select group of nerve calls and pathways (motor neurons) in the brain and spinal cord. The loss of motor neurons leads to progressive paralysis of the voluntary muscles. The heart is not a voluntary muscle and, therefore, remains unaffected by the disease. However, since breathing is controlled voluntarily by the chest muscles, death usually occurs when these muscles are no longer able to help the lungs achieve adequate oxygenation. Generally, there is little impairment to the brain or senses.

For the most part, the battle with ALS is short, with 80 per cent losing their lives within three to five years of diagnosis. Between 10 and 20 per cent live 10 years or more after diagnosis, while others only live a few months. The cause is unknown.

In 85 per cent of cases, ALS affects the lower portions of the spinal cord first. This is known as "limb onset ALS." In these cases, muscle weakness, cramps and weakened reflexes affect the muscles in the arms and legs as the first signs of ALS. For others, the muscles for speaking, swallowing or breathing are the first affected. This is known as "bulbar ALS." The rate of muscle loss can vary significantly from patient to patient. ALS symptoms, and the order in which they occur, also varies.

All this I learned after Mom was diagnosed. I told her that she would not go through this alone, that I would be beside her all the way, so I read all I could about how to slow the disease's progress and encouraged Mom to keep moving her hands, arms and legs every free minute to keep her muscles alive as long as possible.

I made an appointment with the ALS chapter for eastern Ontario, where I met an amazing person and very good friend Marion Williams, who was the regional manager. Marion explained that ALS didn't get a lot of support from the government and that most funds come from the families of ALS patients.

Preparing for the future
Before long, Mom and her best friend Sandra began looking at nursing homes to find a place where Mom knew she would have to live someday. Mom started dividing up her belongings among my two siblings and me because she couldn't keep them anymore. It was just more stuff in her way. Mom had to move to an apartment on the first floor of her building because climbing the stairs was so tiring.

One day Mom said to me, "You have to find a way to bring awareness to this disease." I promised her that I would, and that I would raise funds for ALS as well. In 2006, I held the first Drive4ALS, a golf tournament in the Ottawa area, and raised more than $4,000 dollars for the ALS community.

Shortly after the tournament, Mom set aside her cane and began using a wheelchair. And shortly after that came the need for a motorized wheelchair - all within two short years. Mom could no longer cook three meals, couldn't do laundry, couldn't even bathe herself - all things you and I take for granted. Mom had help from a PSW worker three days a week, and every morning.

Adjusting to a new way of life
By June 2007, Mom moved into the Gary Armstrong Nursing Home. I felt so bad - but Mom loved it and made friends instantly.

One of those special friends was a woman named Jenny, another resident. They explored the city together from their wheelchairs, going to the mall, Tim Hortons, Wal-Mart - you name it. Mom had a great summer in 2007 with her new travelling friend.

That year I had another golf tournament with help from individuals who lost loved ones to ALS. This time, we raised $8,500 for the ALS Society. This brought that beautiful smile back to Mom's face; she felt proud that she was helping others with this disease.

By that time Mom needed a machine called a bi-pap (which forces air in and out of the lungs) to help her breathe when she lay down, because the muscles around her lungs were dying. Mom explained to all the nurses and PSW workers how to use and clean the bi-pap machine. She taught everyone she ran into in the nursing home how to treat a patient with ALS - a true advocate for other sufferers.

Mom's life, it seemed, was getting smaller and smaller each day. The staff of the nursing home suggested she not go outside on her own anymore in case she didn't have the energy to get back. Everything was disappearing from her, but she still had that wonderful smile.

By Christmas 2007, Mom began to tell me she was dying. We began to talk about funeral arrangements - and the stuff she needed to buy for the ALS Society so others would have it. Mom always worried about others before herself. I remember once she noticed a man eating at her table was bothered because he couldn't see outside, so she asked the staff to move him, or change with her. And she always talked about how wonderful the staff members were, no matter their job.

Mom was eating less and less, and we thought the end was coming, but she just kept fighting her disease to the fullest. She surprised everyone and lived another year.

By March 2009 Mom weighed barely 55 pounds and could hardly breathe. She passed away on April 17, 2009. But even on this day, despite all that she'd been through, and all the muscle strength ALS took from her, she still managed her beautiful smile.
MORE ARTICLES
load more