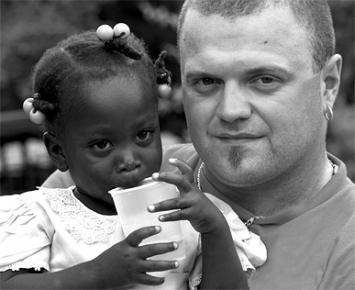 Vaden Earle met this little girl in a Dominican garbage dump in 2007. He and his wife Christal are now trying to adopt her.
"Voluntourism" is a form of travel that has been gaining momentum in recent years. Instead of spending their vacation sunbathing on a beach or relaxing at a spa, voluntourists use their holiday time to aid in humanitarian efforts around the globe. And Vaden Earle, formerly of Griquet, Newfoundland, is helping people do just that. He founded Ontario-based non-profit organization Absolute Leadership Development in 2000, which arranges "Hero Holidays" for this growing band of noble tourists. Downhome tracked down Vaden recently and asked him a few questions about his organization and the concept of voluntourism.

DH: Why did you decide to start Hero Holiday?

VE: I wanted to create an opportunity for average, everyday North American high school students to see outside themselves and into the life of someone else. I wanted them to grasp the concept that by helping to change someone's life, they, in the end, are helping and changing themselves. It was ultimately inspired by a little Cambodian girl named Sukan. She is an eight year-old Cambodian girl, sold by her parents to help pay the expenses of raising the rest of their family. (Read more about Sukan's tragic life in Vaden's book, One: a Face Behind the Numbers).

DH: What kind of person do you have to be to go on a Hero Holiday or go to a developing country to help others in need?

VE: There's no specific kind of person that's required to go on one of our Hero Holiday trips or to go to a developing country. As long as you're someone who wants to help, in any capacity, you're welcome to join us. We literally have all types from troubled teens to executives.

DH: There are some that are of the opinion that voluntourism isn't really a good concept. What do you think about this, and why should people consider voluntourism as a way to help others in need?

VE: No one can dismiss the fact that we're doing something tangible in these people's lives. Most of them live on less than a dollar a day and don't have the opportunities and/or resources to help themselves. So to show up and provide a proper home for them, a school for their children to attend, sponsorships for their children to attend those schools - and with that hope for their children's futures, medical aid, etc - if by that you mean we aren't doing anything significant in these people's lives than you shouldn't come on one of these trips. Continue to donate your money and we'll gladly continue our work. The other thing that the skeptics miss is that many people come home and become advocates in other ways...career changes, giving back, educating themselves etc. The benefits do not end at the trip.

DH: Is there a way to distinguish between good voluntourism opportunities, and those that might be trying to take advantage by pulling on people's heartstrings?

Find out more about Vaden's work with Absolute Leadership Development and the Hero Holiday program by clicking here.