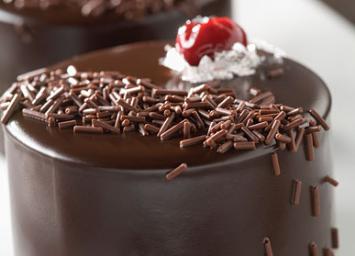 Coated in chocolate ganache, these mini black forest cakes are the perfect way to cap off a scrumptious Valentine's Day meal with your sweetheart.

Preheat oven to 350°F. Grease and line a 17"x12" jelly roll pan. Melt chocolate chips and water in small saucepan over low heat; cool to room temperature. Combine butter, sugar, eggs, flour and cocoa powder with the cooled chocolate mixture in a large bowl; beat on low until batter is smooth. Spread into prepared pan. Bake for about 10-15 min. or until toothpick inserted comes out clean. Cool cake in pan on wire rack for about 20 min.

Cut 15 circles from cake using a 2 ½" round cookie cutter. Take care when removing them, as they're quite delicate. Refrigerate cakes for an hour till they're firm to handle. Place one cake layer on plate. Top with a tablespoon of cherry pie filling. Spread a layer of whipped cream over filling. Top with another cake layer. Cover with layer of pie filling, then whipped cream, and finish with third cake layer. Repeat steps with remaining circles to make five, three-tier cakes.

Ganache: Combine chocolate and cream in a small saucepan, stir over a low heat until melted. Let stand for 15 min. or until the ganache begins to thicken slightly. Spread top of each cake with ganache and allow it to flow over sides. Top each with the reserved cherries and, if desired, shaved chocolate or whipped cream.

These are the same yummy cakes that appear on the cover of the February issue of Downhome.