Yoga: For Every Body 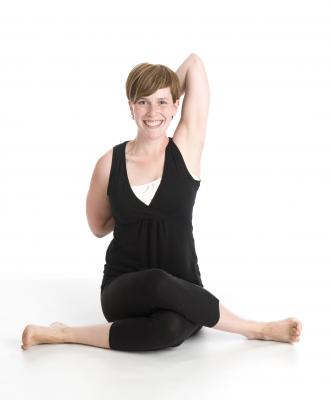 In my teaching, I meet people every day who say they can't do yoga because they're not flexible, or their mind is scattered, or they don't have good balance, etc. etc. My response is always the same: people don't do yoga because they've already mastered these things; they do yoga to practise and become more adept at them. Not flexible? Perfect! Yoga will help. Your mind runs a million miles per minute? Great! Yoga will help with that, too.

Not only are inflexibility and poor focus not reasons to avoid yoga, neither should age deter you. If you are a yoga beginner and an older adult or have limited mobility, it's important to choose a yoga class and teacher with experience working with these populations. Anybody and everybody can do yoga; with a supportive teacher and the appropriate pose modifications, the practice can be adapted for the individual so that every experience is positive and uplifting.

Yoga is more than an exercise regime; it is an ancient philosophy of living that benefits both mind and body. The practice is made up of physical poses (called asanas), breathing techniques (pranayama), meditation and a variety of ethical precepts that offer ways to live a fuller life. Yoga offers myriad benefits including strengthening and toning the body, calming and relaxing the mind and bringing balance to an otherwise hectic modern lifestyle.

How-to: Three Part Yogic Breath
In any yoga practice, the method of breathing used is a key, foundational concept. There are many types of yoga breathing, but the first and most important is called the Three Part Yogic Breath. In this breath practice a full, deep, diaphragmatic breath is achieved. This calms the nervous system, relaxes the mind and creates a deep, mind-body connection.

Begin in a comfortable position lying on your back or seated in a firm chair with both feet planted on the ground (place something beneath your feet to support them if they don't reach the floor). Close your eyes and notice how your natural breath feels. Then place both hands on your low belly, palms down, with the tips of your middle fingers meeting over your navel. Begin to breathe deeply into the lungs, encouraging the belly to rise on the inhalation and fall on the exhalation. As you breathe in, your hands will rise and move apart; on the exhalation they will lower and draw together. Take five deep breaths like this, in and out through the nostrils if possible (if there is restriction in the nose it is okay to breath through the mouth, but breathing through the nose is more effective).

Now move your hands up so the heels of your palms are resting on the sides of the low rib cage and your middle fingers are touching. Keep the belly stable as you move the breath up into the space of the rib cage. As you inhale, the rib cage will expand in all directions: front, back and into both sides. Your hands will move up and apart. On your exhalation, let the rib cage soften back to a resting position, hands moving down and together. Take five deep breaths like this, in and out through the nose if possible.

Finally, move your hands up so the fingertips rest on your collarbones. Keep the belly and ribs in a neutral position as you breathe into the upper lungs and upper chest. Your hands will move up and apart on the inhale, down and together on the exhale. Take five breaths here, knowing that these breaths in the upper chest may feel more shallow and constricted than in the belly and ribs. Don't force the breath; breathe slowly.

Now you are ready to practice the full Three Part Yogic Breath. In your comfortable seated or supine position, rest your arms by your sides. Breathe in through the nose. You should feel your belly rise first, then the rib cage expand and finally the collarbones lift and separate. As you exhale the chest softens down, ribs move back to neutral and the belly draws back towards the spine. Take five to 10 breaths like this, increasing the number of breaths as you feel more comfortable with the practice.

At first this may feel very challenging and you may not easily feel the distinction of each of the three parts. Most often people breathe into the upper chest, creating a rapid, shallow breath. The belly and rib components may take more time to develop. Remain calm and comfortable at all times, never forcing the breath. Keep an inward focus as you breathe, focusing your attention on the sensation of the breath.

How to: Tree Pose
Tree Pose (or Vrksasana, as it's called in yoga class) is a challenging, yet attainable pose to develop muscular legs, open hips, a balanced mind, a strong will and determination. The process of losing balance in this pose teaches us to try, try and try again without judgment or irritation.

To do Tree Pose, start near a wall for support, standing side-on with your right hand placed on the wall. Stand tall, pressing your feet down into the earth and lengthening the spine by drawing the crown of your head up towards the sky. Now shift your weight into the right leg and turn your left knee to the left, placing the toes on the ground and your left heel onto the right leg, above the ankle. Place your left hand on your waist. Focus your eyes on something stable - a spot on the floor or wall - and gaze intently. If you feel steady you can lift your left foot onto the calf muscle of your right leg (be careful to avoid the knee, placing the left foot below the right knee). Press your standing leg into the lifted foot, and the lifted foot into the standing leg. Notice the sensation of being grounded as your right foot connects to the earth, and enjoy the feeling of freedom in the upper body as you balance on one leg. Take three Three Part Yogic Breaths here and then place your left foot on the floor, remove your right hand from the wall and turn around to do the other side.

How to: Seated Spinal Twist
Using the support of a chair, this spinal twist encourages mobility in the spine, strengthens the back muscles and massages the abdominal organs, which assists in healthy bodily functions (including digestion).

To begin, sit at the edge of a chair so there is space between your back and the seat back. Plant both feet firmly on the floor - if they don't reach put a blanket or even a telephone book underneath them. Lengthen your spine, the sides of your waist and even the sides of your neck. Make your chin parallel with the floor. Place your right hand onto your left knee. Rest your left arm at your side. Take a breath in and lengthen from your tailbone to the crown of your head. As you exhale, begin to turn your belly to the left. Take another breath in and lengthen, then exhale and turn your ribcage to the left. Take another deep inhale and as you exhale, turn your chest and shoulders to the left. Let your gaze follow this internal movement and rest over your left shoulder. With every breath in, feel your back-body grow longer, and with every breath out twist more deeply. Stay for three to five breaths, then with an inhalation, slowly come back to centre. Do the same thing on the other side.

The twist should never be forceful, but rather a natural extension of your deep breathing as though the body moves on the wave of the breath. If you feel tension or pinching in the pose, release it and try again with a more gentle approach. Always balance your practice by doing the pose equally on each side.
MORE ARTICLES
load more