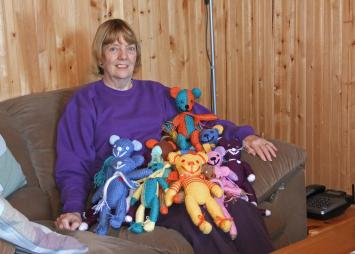 
Originally from England and the island of Jersey, my husband Tony and I came to Canada in 1972 and settled in Cornwall, Ontario. Four years later we moved about 20 kilometres west to the small village of Ingleside and for the next 32 years, we commuted into Cornwall for work. In 2005, we took our first true vacation in years.

Never having ventured farther east in Canada than Quebec City, and being passionate about wildlife, we decided to go whale watching. Why we chose Newfoundland and Labrador we don't know to this day, and never did we think that this would prove to be such a life-changing event.

We signed up for a Wildland Tour that promised bergs, birds and whales. Our tour guide, Jean Knowles, met us at the airport. We now take pleasure in telling everyone that our being in Newfoundland and Labrador is all her fault. Over the following days, she taught us everything about this island from its history, and educational and political systems, to the finer points of searching for bakeapples, bears and moose.

After just two days, we both knew we needed to come back. For me it was the beach at St Vincent's with its crashing surf and gannets diving for capelin. For Tony it was the barrens going down to Trepassey with a howling wind that barely allowed us to remain upright, no trees and little of anything else.

We returned to Ontario and surfed the web, delighted to discover we could probably afford a home on the island. Within a couple of months, we had narrowed down our real estate finds and Tony flew down to check them out. The last one he visited was in Chance Cove. It was "the one" - he almost wrote out a cheque for it there and then. We purchased the home in October 2005, sold our home in Ingleside and made the move in May 2006.

Friends and family thought we were crazy, but they should have realized that this was not the first snap decision we had made. We met each other for the first time in February 1964 and were married that June. Tony was offered a job in Canada in 1972, and that decision was also quickly and easily made.

We weren't long in our new home before we had visitors bringing welcoming gifts of muffins, cookies and fish. Chance Cove made us feel at home from day one, as if we had always been here.

That fall I joined the Chance Cove Anglican Women's Group to meet people and become part of the community. By the winter, I was vice-president and held that position for the next three years. We both joined the local Lion's Club and really enjoy all the community activism. Especially fun is the Seniors Banquet. Last year we served more than 200 seniors and their guests. They enjoyed roast turkey with all the trimmings and pies of every description. I have never had such sore wrists from mashing mounds of potatoes or such orange fingers from being on "carrot patrol," but I wouldn't exchange these experiences for anything.

Tony, in his first-ever venture into politics, put his name forward in the 2009 municipal election. He is now deputy mayor of Chance Cove and enjoying learning how municipal government works.

I became somewhat incapacitated in the winter of 2008 with sciatica and it was 19 months before I was pain-free and back to normal. During that time, in order to prevent cabin fever, I took up knitting. I had been taught how to knit in school at a very early age but hadn't practiced in many years. I found a pattern online for a Mr. Bean-type teddy bear and halved the pattern to make smaller ones. Soon I was hooked. I lost count at 100 bears and I'm still at it. Tony thinks I need a branch of Knitters Anonymous to cure me of my addiction.

My teddies have been sent to underprivileged children in Labrador through the church; to the Janeway children's hospital in St. John's, where they are given to children after their outpatient cancer treatments; and to friends in exchange for more wool. Who would have thought that my biggest contribution to this island would be in the form of teddy bears!

We have learned so much about this island and its people, and we hope that we are beginning to leave some small mark on this great community that made us feel so welcome. In honour of our new home and our new friends, I wrote this little rhyme:

We've jigged for cod; we've seen the whales,
Now we can tell you lots of tales.
We've sailed round massive bergs of ice
A thrill for sure, at any price.
We've seen bald eagles from our deck
Know why that pets are kept in check
As eagles love small dogs to eat
A yappy meal is such a treat.
When strong nor'easters hit the cove
We huddle close up by the stove
Our house she rocks as if to say
Don't worry folks, I'm here to stay
What the locals daily preach
Is eat your food with lots of Screech
Cod tongues and scruncheons, flipper pie
There is no need to wonder why.
Your English too is somewhat odd
Perhaps from eating too much cod.
The deck's the bridge, the shed's the store
I'll never learn it that's for sure.
Thank you to everyone on this isle
For every day we stop and smile
To think that we are simply here
With friends and places now held dear
We still miss friends in parts away
But on this isle we want to stay
We love the Rock and here well bide
Until we're called to the other side.
MORE ARTICLES
load more