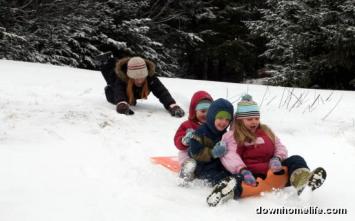 Sledding siblings Angela, Claire, Dalton and Hannah have a blast sliding in Conception Bay, Newfoundland. Teri Delaney photo.
Atlantic Canadians not only know how to handle winter, we know how to celebrate it. We embrace the snow and ice with enthusiasm and creativity, and have found ways to make winter a season jam-packed with fun activities and events. Check out some of the unique, fun, thrilling - and just plain crazy - things Atlantic Canadians will be doing this winter.

Corner Brook Winter Carnival, Corner Brook, Newfoundland
In celebration of the 40th anniversary of the Corner Brook Winter Carnival, an exciting new event has been added to the schedule of events. Compete in Cook's Quest - a homemade two-person bobsled race set to take place on Lower Hospital Hill on February 20. Don't forget to bring a snowmobile helmet, and register by February 16. For complete details on the carnival, which runs from February 18-27, click here.

SnoBreak, Happy Valley-Goose Bay, Labrador
Come out and participate in a SnoBreak tradition: Turkey curling. That's right, curling with frozen turkeys will take place on Thursday March 10. Experienced curlers will show all you turkey-curling amateurs how it's done - and then you get a shot at it! Turkey curling not your thing? Click here to find out about more exciting events taking place from March 6-12.

Winterfesthiver, Fredericton, New Brunswick
Get ready to get lost! Winterfesthiver, taking place February 5-6, will feature the CAA SnowMazing Labyrinth and they promise that you've never seen a maze quite like this one. The maze, made completely of snow, measures 40 metres by 40 metres (with two metre-high walls). With tons of twists and turns throughout, you'll have to have your wits about you for this fun winter activity! Click here for details on all the other winter thrills this exciting festival has in store.

Jack Frost Children's Winterfest, Charlottetown, PEI
Tweens in Charlottetown, PEI especially will be looking forward to this year's Jack Frost Children's Festival, which runs from February 11-13. Sherwood Greens (the festival's new venue) will be rocking when Miley Cyrus, Hannah Montana, Taylor Swift, Jonas Brothers and Justin Bieber impersonators take the stage. Not a fan of tween music? Click here for the rest of the festival's events.

Mount Pearl Frosty Festival, Mount Pearl, Newfoundland
Sometimes the best way to recover from a cold winter day is a hearty night of laughter. Do just that at Frosty's Big Comedy Night, starting 9 p.m. at the Glacier on February 5. Hosting the event is Paul Warford, finalist in the St. John's tributary of the Great Canadian Laugh Off, plus hilarious performances by Brian Aylward (2010 Comic of George Street) and Steve Coombs, who debuted at the 2008 St. John's Comedy Festival. Click here for details on the rest of the festival, which runs from February 4-12.

Snow Blast, Florenceville-Bristol, New Brunswick
Bring the whole family to Riverside Park for a fun-filled day of winter activities. One highlight of Snow Blast that promises to be a crowd-pleaser is scheduled for 12 noon, when onlookers can watch a four-foot block of ice turn into an amazing creation with nothing but talent...and a chainsaw! Click here to find out what else is in store that day.

Wintertainment, Clarenville, Newfoundland
On February 14, take the whole family along on the "Touch the Star Hike", a 3-km trek that takes hikers up Bear Mountain - where you can see up close the Christmas star that can be spotted far and wide during the holidays. Once at the top, warm your hands around the fire as you sip hot chocolate while taking in a breathtaking view of Random Sound. Wintertainment runs from February 11-20. Find more details here.

Riverview Winterlude, Riverview, New Brunswick
Families can have fun while giving back during a unique charity event called "Winter Wipeout." On February 5 a group of youth will attempt to construct a skateboard ramp with cans of non-perishable food at Riverview Skatepark. Surface Skate shop will hold a best trick event in which skateboarders will battle it out to win prizes. Admission is - what else? A non-perishable food item. All cans will be donated to a local food bank. Click here for more fun activities scheduled for this year's Winterlude (February 4-13).

Cain's Quest, Labrador
While not exactly a carnival, Cain's Quest is just too incredible an event to leave off any list of cool winter activities. The longest snowmobile endurance race in all of Canada, Cain's Quest sees teams of two set off from Labrador City on snowmobiles in a 2,500-km race through remote Labrador. And what awaits the winner at the end? A whopping $65,000 prize. Complete details can be found here.