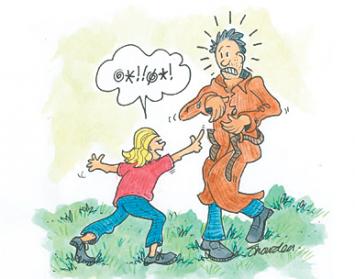 
In attempting to teach my four-year-old daughter the dangers of strangers, I mentioned that, in addition to not talking to strangers, she should be aware that they may try different ways of attempting to "hurt" her. I told her the "bad person" may ask her to help find their dog. If they did, she is to yell "No!" and run the other way. If they follow or touch her, she is allowed to start shouting bad words. When reviewing this lesson with her, I asked what she'd do if someone she doesn't know asks her to help find their dog. She replied, "I'll say, 'Find your own damned dog!'"