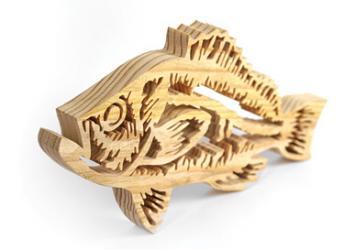 Just the other day, we received the most impressive piece of mail ever delivered to Downhome by Canada Post - hands down. We get a lot of great mail from readers, from amazing photographs, to original artwork, to archival documents. But this was something we never expected to receive - though in a way, we should have.

You see, it has to do with that ever-present Corky Sly Conner. He's been swimming among the pages of Downhome since the magazine itself was just a fry. We get more letters from readers who find Corky than about anything else in the magazine! When I meet readers in my travels, so many of them begin by telling me, "The first thing I do when I get my magazine is look for that little fish!" And if he's not found within a few days, people call our office to make sure he's in there and ask for clues as to where he is hiding (which we can't give, as it's a contest and that would be giving an unfair advantage).

Subscribers write about how they try to sneak off with the new issue as soon as it arrives, so they can find Corky before their partners get a chance to look and they can have bragging rights to finding him first. Some years ago, one man sent us a poem he had written, about how his wife was so immersed in finding Corky every month that he was convinced she'd rather go to bed with Corky and her magazine than with him! Another reader wrote to tell us how she and her husband almost divorced because they were fighting over the magazine on the hunt for Corky. We think she was exaggerating to stress how much they enjoy the contest and the magazine - at least, we hope so. As far as we know, Corky's never been named in divorce proceedings.

Admittedly, Corky has been left out of three issues since his debut around 200 issues ago. Most recently, a digital production glitch caused him to be left out of the October 2010 issue. That problem was soon turned into opportunity as readers were challenged to guess where we found Corky after he'd been "fishnapped." Readers sure had fun trying to figure out where that sly fish had disappeared to, with several readers "finding" Corky in sections of the October issue where he wasn't (a popular wrong guess was on a red hoodie on page 161).

The letters we get about Corky are actually contest entries, but people will go through the effort to dress up their entry letter and envelope with hand-drawn images of Corky, shiny stickers and fancy lettering. They're very entertaining and staff often pass around the best-dressed envelopes for others to see. But what we received at the end of October 2010 astonished us.

It was carefully packed in a brown courier envelope marked "RUSH!" Inside was a letter from Eric and Linda Beatty of Oshawa, Ontario:

"We are returning one very lost fish. We found him swimming/floating in Lake Ontario, just southeast of Oshawa. He's a little thin now, but he'll recover."

The Beattys had sent us a beautifully carved, 25.5 cm (10 in.) wooden replica of our Corky Sly Conner! We called up Eric and found out that he does custom scroll works as a hobby. Always looking for a creative challenge, and being fans of Downhome, he took the tiny image of Corky from the magazine and had it enlarged as big as he could, then used that as his template. For several hours, he worked on a piece of Brazilian pine, using a scroll saw with a five-inch blade the width of three human hairs. What he produced we can only describe as a masterpiece. We will be proudly displaying this gift in our St. John's office for all our visitors to admire.

And... Eric has agreed to make us a few extra carvings so that during 2011, some lucky winners of the Find Corky contest are going to have a real trophy to show off. Stay tuned for more details in future issues, and keep your eye out for that sly conner!