Inside the Mind of an Extreme Athlete 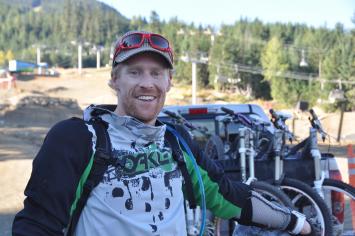 In the January 2011 issue of Downhome, staff writer Linda Browne explores what makes extreme adventurers tick. See the January issue for comments from a duo of extreme swimmers and a sports psychologist. And she recently spoke to Olympic gold-medal winning skeleton racer Jon Montgomery - star of the Discovery Channel feature Best. Trip. Ever. that premiered on November 27, which saw Jon and his friends having extreme adventures - to find out what drives him.

Downhome: Obviously, you're someone who knows a thing or two about having drive and determination and reaching your goals. Is testing your full potential and pushing your body to the limit something that always appealed to you? Were you an adventurous type and thrill seeker even when you were a little kid?

Jon: I've always wanted to push the limits both in sport and as far as my boundaries were concerned both in class and at home growing up. I didn't usually quit till I got it right, got hurt too badly to continue, or got in trouble. I don't think much has changed.

Downhome: When you're getting ready to compete, how do you prepare yourself physically and mentally? What, in your opinion, is the quality that separates armchair athletes from extreme thrill seekers and limit-pushers?

Jon: While preparing to compete I do everything I can to make sure that my game plan is as complete as possible. I wanted to take today off from sliding and training to rest and recover but I couldn't stay away from the track because I'm having some issues and don't want to ever have doubts about my preparations. If you can go into a race with a calm about yourself because you have done everything you could possibly do, you can race with confidence and not doubt yourself. It's this confidence that will let an athlete be in the moment while laying it all on the line when it matters most, while competing.

Downhome: I just saw a preview for Best. Trip. Ever., and it looks awesome. How did the idea for the show come about?

Jon: They approached me with the concept and suggested that me and my three best buddies go on this adventure. I thought that it would make for a better experience and better TV if I went with my fiancée, coach and teammate. We are all really close and have travelled with each other extensively. Being natural and able to feed off each other I think is key to coming across well on TV. It was an awesome trip and much more demanding than I ever expected. We were doing 12-17 hour days of shooting extremely demanding extreme sports and recording everything. We've never done any TV before so it was all new to us but an absolute blast too. The crew was great and made it easy to be ourselves.

Downhome: Out of all of the adventures you guys went on, what was the most challenging (or scary) for you? Any personal fears you had to face?

Jon: The most challenging was the downhill mountain bike heli drop. Because it was on the last day and I was both physically and mentally exhausted it was a real struggle to get off that mountain safely. The scariest adventure was the safest. Slack-lining was a real trip mentally but very safe. We were rigged up by the best pros out there and if we fell we just fell into an open expanse of 600 feet of air below us. There was nothing to hit but stepping out on an inch and a half tie-down strap that's stretched across a 100-foot gap with 600 feet of nothingness below you is tough to get your brain wrapped around. And it's not like it was over as soon as you jump like in skydiving or bungee jumping. You have to keep moving and get to the other side, which takes probably 5-7 minutes. That was cool.