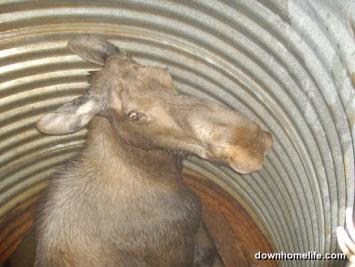 Kevin McDonald was shocked to see this moose stuck in his well early one morning last summer.
By Ashley Colombe

Living in a secluded area in Portugal Cove-St. Phillips, Newfoundland, Kevin McDonald is no stranger to wildlife roaming his property. But last summer, both he and officers from the Department of Environment and Conservation got the surprise of their lives.

"I got up to walk my dogs at six a.m. as per usual, and on the way back to the house, I heard something over by my well," says Kevin. When he peered down into his well, what he saw still amazes him to this day: the pleading eyes of a moose staring back at him.

"She looked up at me and I said, 'I'll get help,'" Kevin recalls, chuckling now at his response. He guesses the animal had stood on his well to reach the pin cherry trees in his backyard, causing the well's cover to collapse.

In short order, Kevin contacted the Department of Environment and Conservation, called NTV news with the scoop, and grabbed his own camera to snap photos of the entire production - and it was a production. It took a specially trained conservation officer, a tractor borrowed from Kevin's neighbour, and certainly a little patience to extract the creature, which was standing in about four feet of water.

At first, the officers suggested the possibility of shooting the moose, but Kevin wouldn't hear of it. Aside from spoiling his well, he thought it a shame to destroy the animal if there was a safe way to remove it. So armed instead with a tranquilizer dart, one of the conservation officers took aim to subdue the beast.

"(The tranquilizer) kind of bounced off (the moose) but we thought, 'ok, it might have just hit and went in and then fell off...we really didn't know at the time, so (the officer) couldn't give her another dart because it probably would have killed her," says Kevin.

that the moose had received the tranquilizer, one of the officers climbed down into the well. Standing face-to-face with the wild animal in a very confined space, the officer harnessed the moose to straps that were attached to a tractor. The moose, which Kevin figures had been stuck in the well for four to five hours, seemed to take the action quite well.

was a bit antsy then but she settled down when she figured, 'well, they're not hurting me to this point, they're going to try to help me and get me outta here,'" Kevin surmises.

but surely, the tractor hoisted the moose to solid ground. Expecting the animal to still be groggy from the tranquilizer, everyone was surprised when the moose was freed of the straps and it rose and stood tall before them.

"So everybody kind of backed away then because she wasn't tranquilized," says Kevin. "And here was the officer down in the well with her!"

than bolting immediately, the moose hung around for three or four minutes, says Kevin. Aside from a patch of hair missing from its rump, the moose appeared no worse for wear after the ordeal.

"It kind of looked at everybody, then munched on a couple of alder trees that were alongside of it, had another look and just strolled out through my back garden, across the sod farm and went on...probably just saying her thank yous or something," he laughs.

Kevin, a moose hunter in season, admits, "I felt for the poor old thing." And while others may curse wild animals as nuisances, Kevin sees things differently.

"Depending on where we live we have to cohabitate with the critters, so we just do the best we can to try to not walk on their turf, and they'll stay clear of ours."