Top 12 Places Downhome Has Been 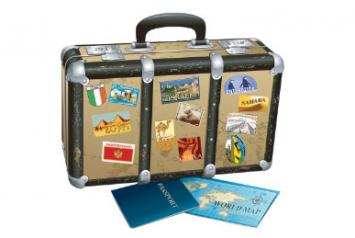 A heartfelt thanks to anyone who's ever taken Downhome on their travels - both near and far. Whether or not your photo appeared in this year's "Top 12 Places Downhome Has Been" list, we truly appreciate being taken along for the ride. And it's not over yet. Next year, we'll be displaying even more of your Downhome Around the World snapshots, in a whole new way. So stay tuned - and keep those trip photos and travel diaries coming. We're always curious to see where Downhome will end up next! Reader Linda Rumbolt-Solie travelled to the San Blas Islands, off the Caribbean coast of Panama, in 2009 and passed on an issue of Downhome magazine to a Kuna Indian chief's wife. "They want magazines in order to learn English," writes Linda.

An Ancient Society
The Kuna Indians, most of whom live on the San Blas Islands, carry on life today in much the same fashion as their ancestors. They travel between the pristine, tropical islands in hand-carved canoes, live in huts made of bamboo and thatch, and survive by trading coconuts, fishing, and selling jewellery and their famous "molas" (intricately designed blouses) to tourists. Remarkably, the Kuna Indians have retained their customs and traditions while the world around them continues to modernize.

Presenting No. 2: Village of Hope, Malawi While serving as National Director of the Village of Hope in Malawi, Africa, Gander-native Clarence (Junior) Andrews gave orphaned children their very first glimpse of snow - portrayed in reader-submitted photos in an issue of Downhome. Eric Roberts of Calgary, Alberta (formerly of Hare Bay, Newfoundland) travelled to Antarctica in February 2008. Here he is at Brown Bluff, showing the penguins an old copy of Downhomer and a Downhome recipe booklet. (Gilles Fournier photo)

Volcano Under Ice
Brown Bluff (where the above photo was taken) is a million-year-old sub-glacial volcano, formed by an eruption below the surface of a glacier. Brown Bluff is 2,444-feet high and stands at the northern end of the Antarctic Peninsula. The area is a nesting site for thousands of gentoo and Adelie penguins, and is also frequented by seals and killer whales.

Presenting No. 4: Bay of Pigs, Cuba Gary and Debra Nagle (originally from Chamberlains and Manuels, Newfoundland respectively) pose with an issue of Downhome (water-proofed inside a Zip-loc bag) 35 feet underwater in Cuba's Bay of Pigs. (Photo by Deb Nicholls.)

Bay of What?
No, there are no porkers swimming in the waters off Cuba. In Spanish, the area is referred to as Bahia de Cochinos. While the English translation of cochino is, in fact, pig - in this case cochino refers to a species of fish in Cuba. In reality, a more accurate english language translation of this area would be "Bay of Cochinos Fish."

America Embarrassed
In April 1961, the Bay of Pigs was the starting point for one of the United States' biggest military blunders. Under directions from President Kennedy, more than 1,400 Cuban exiles living in America were sent to invade Cuba to overthrow Fidel Castro and bring democracy to the communist country. But the plan quickly began to unravel when the chosen landing site (the Bay of Pigs) turned out to be swampy and difficult to cross, giving Castro sufficient time to rally his own troops and in short order, the invaders surrendered. While living in Chile, David and Dorothea Besaw (formerly of St. John's) decided to travel to Easter Island and visit its mysterious stone sentinels.

The Mysterious Moai
When Dutch explorer Jacob Roggeveen discovered the isolated Easter Island (on Easter Sunday in 1722), he found sparsely populated, barren land strewn with hundreds of giant heads carved from stone (called "moai"). Since then, scientists have puzzled over how the small group of people Roggeveen reported seeing on Easter Island could have possibly created the grand statues.

Archaeologists have since determined that centuries before Roggeveen's discovery, a booming civilization (estimated at 10,000-20,000 people) - which would have been capable of such a feat - existed there. But after years of ruthlessly depleting their own resources, by the 18th century many of the island's inhabitants had perished of their people's own doing, leaving only the magnificent moai as evidence of a once-flourishing society.

Presenting No. 6: The Ostrog Monastery, Montenegro Originally from Cape Broyle, Newfoundland, sisters Irene O'Brien of Riyadh, Saudi Arabia (left) and Denise White of Fort McMurray, Alberta brought a copy of Downhome for their trip to Montenegro and the Ostrog Monastery in 2009.

It's a Miracle!
Each year, more than 100,000 tourists flock to the holy landmark, some of them looking for the answers to their prayers. Accounts of healings happening during visits to the monastery abound, and one circulating story tells of a baby incredibly surviving a treacherous fall from one of the monastery's walls - totally unscathed.

Quite the Climb
At about 2,952 feet above sea level, the Ostrog Monastery offers a breathtaking view of Montenegro. The 17th century architectural marvel is situated within a steep cliff face and is located about 50 km from the country's capital city of Podgorica.

Who's Behind the Healings?
The Ostrog Monastery is considered one of the world's holiest sites because it is the resting place for Saint Basil, who was known in life as a miracle maker.


Presenting No. 7: The Great Wall of China Caryl Kennedy and Dennis Callahan of Massachusetts took the April 2010 issue of Downhome to the Great Wall of China. (Photo courtesy of Elizabeth Kennedy.)

Which Wall?
To protect his people from attack, Emporer Qin Shi Huang ordered the building of the Great Wall of China in 221 BC. However, this wall is not the one tourists from around the world visit today. The Great Wall of China visible now was mostly built during the Ming Dynasty (between 1368 and 1644), when the original wall was rebuilt and extended.

The Moon Myth
Although the myth has been debunked over and over, many people still believe the Great Wall of China can be seen from the moon. It even appears, erroneously, as a "fact" in the game Trivial Pursuit. Kristen Wells of Halifax, Nova Scotia poses with the July 2010 issue of Downhome atop Mount Vesuvius in Italy.

Look Out Below!
Mount Vesuvius, located just east of Naples, Italy, is considered the most dangerous volcano in the world due to its violent eruptions and densely populated surrounding area. Most notoriously remembered for its eruption in AD 79, when it buried the city of Pompeii, Mount Vesuvius has since erupted dozens of times. A couple of particularly severe eruptions have gone on record as having blown ash 1,200 km away. Today, experts note that Vesuvius is overdue for an eruption, and volcanologists constantly monitor seismic activity in the area from an observatory on the mount.

Presenting No. 9: The Sahara Desert Channel-Port aux Basques natives Judy and Carol (Knee) and their husbands, Harry Coates of Bay Roberts and Dave Blacklock of Edmonton, brought several issues of Downhome along for their trip to the Sahara Desert.

A Camel's Humps
It doesn't take a zoologist to differentiate between the two species of camels. They come in the one-humped variety (called dromedary camels) and the two-humped variety (bactrian camels). Contrary to popular belief, camels store fat (not water) in their hump(s). When food and water are scarce, this adaptable animal uses its storage of fat to get it through the dry spells. A camel whose hump appears deflated hasn't eaten in a while, while a plump hump means he or she has recently fuelled up. Readers Lisa and Chris McManemin of Basking Ridge, New Jersey, USA (formerly of Newfoundland) brought the June 2008 issue of Downhome along for their tour of the Wailing Wall during their visit to Jerusalem.

Why "Wailing"?
The Wailing Wall (also called the Western Wall) got its grievous name through centuries of unrest in Israel. This religious site is the last remaining retaining wall that once enclosed the Second Temple, which was destroyed, along with the city of Jerusalem, by the Romans in 70 AD. Thereafter, the Wailing Wall (measuring around 1,600 feet in length) became the place where Jews came to lament the destruction of their temple and city.

Built on prayers
Visitors of all faiths often take part in the ancient tradition of wedging handwritten prayers into the wall's crevices. Twice each year, the scraps of paper are removed from the wall and buried on the Mount of Olives (a sacred mountain ridge in eastern Jerusalem). In 2008, Barack Obama (then a presidential candidate) visited the Wailing Wall and placed his own handwritten prayer in its cracks. An onlooker removed Obama's prayer, the contents of which were printed in the Israeli newspaper, Maariv, sparking great controversy among religious authorities. Reader Vince Hancock of Hamilton, Ontario poses with the November 2010 issue of Downhome in the foreground of the pyramids at Giza, Egypt.

Pyramids plundered
The Egyptian pyramids were originally built with an outer casing of polished white limestone, almost all of which was removed for use in the construction of buildings in Cairo, Egypt, in centuries past. So, the pyramids that stand before us today are rougher in appearance than originally intended, with a low-grade limestone gracing the outer walls.

The Egyptians...or aliens
Though it is most commonly accepted that the pyramids were built by the Egyptians themselves, other theories have abounded over the years. Some firmly believe a lost, ancient civilization (predating Egypt) is responsible for the architectural wonders. Still others suggest they are the creations of extraterrestrial beings.

The Great Pyramid: By the Numbers*

755 ft. - length of each side of the base
481 ft. - its original height
2,300,000 - number of limestone blocks used to build it
2.5 tons - average weight of each limestone block
3,200 BC - approximately when many experts believe the Great Pyramid was created (according to carbon dating)
30 years - amount of time experts believe it took to build
20,000 - number of labourers involved in construction

*The Great Pyramid, located in Giza, Egypt, is the largest pyramid on Earth Believe it.
The area is believed to have been home to five biblical cities: Sodom, Gomorrah, Adman, Zebouin and Zoar.

What's in the water?
The water in the Dead Sea has a salt concentration 10 times stronger that of most of the world's oceans, caused by constant evaporation and minerals carried in by rivers (no water flows out of the Dead Sea). As a result, fish perish in the super salty conditions, giving rise to its morbid name. While lethal for fish and other marine organisms, the mineral-rich waters of the Dead Sea are world-renowned for their healing properties in humans. The high level of salinity also gives the water extra buoyancy, so swimming and floating in the waters of the Dead Sea is a unique experience in itself.

Where are you travelling to next? Snap a photo of you holding a copy of Downhome for a chance to make it into the pages of Downhome in sometime in 2012Click here to submit. Bon voyage!