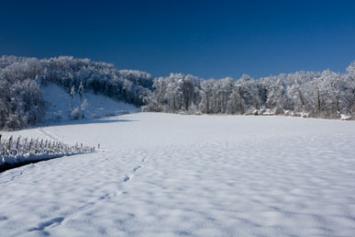 Picture this: It's a pleasantly crisp afternoon in the middle of winter and you're bundled up in a scarf, hat and mittens for a leisurely stroll through the woods. All of a sudden, Old Man Winter gets rowdy and you become lost. What do you do?

"Certain things always come to mind, like staying warm and staying dry is key. Long-term extended care is what you want to be thinking about if you're lost in the wilderness," says Martin Hanzalek, operations manager of My Newfoundland Adventures, an adventure tourism company on the west coast that also offers courses in winter survival and ice safety. Recently, Martin spoke with Downhome about some basic tips to keep in mind if you find yourself lost in the woods this winter.

What Not to Wear

Before you head out the door, make sure the clothes you're wearing under your snowsuit or winter coat and pants will keep you warm and dry. Choose fleece, wool or synthetic fibres that won't absorb moisture. Don't choose cotton. "Being stuck in a cotton t-shirt and jeans out in the wilderness is a really dangerous situation," Martin says. "Things like cotton aren't good options because cotton's a very absorbent material that absorbs a lot of moisture, and when it does that it doesn't provide you with a lot of insulative factors." Wearing the right clothes will not only keep your body warm, but will help you keep a cool head as well. "If I had to chose between matches and a hatchet versus an extra dry fleece sweater with a down jacket and a rain coat, (the latter is) going to be what's really going to keep me warm and dry," Martin says. "Our bodies operate at a balmy 37.5 degrees (Celsius) and so when our bodies get colder...all of a sudden we can't function. Even when we lose just a little bit of that heat we become mildly hypothermic. We aren't able to make solid decisions anymore; our brains don't work as well. So keeping yourself well, warm, dry, hydrated and fed is absolutely crucial to any type of survival in the wilderness, especially the Canadian winter wilderness."

Any time you go into the woods, it's a good idea to pack items that will help protect you from the elements. A tarp, for example, can be folded into a small package, tucked into a knapsack and set up quickly to help keep you dry. If you decide to stay put, rest and collect your thoughts - but avoid sitting directly on the snow, as that will speed up body heat loss. In addition to a tarp, Martin recommends bringing along garbage bags to sit on. "Those two items are lightweight, inexpensive and absolutely effective,' he says. "Having a few of those thick, big, orange garbage bags in your first-aid kit is always a great option because you can just cut a head hole and a couple arms into them, and you can get in and right away they can keep you dry and they can also help preserve some of the heat."

Should I Stay or Should I Go?

Perhaps one of the biggest decisions you'll have to make once you realize you're lost is whether you should remain where you are or keep walking. Whatever you decide will depend on a number of factors. For example, if there are any immediate dangers in the area (e.g. possible avalanche or rock fall), you may want to keep on trucking. If you choose this option, try to follow identifiable features like mountain ranges or big bodies of water that may help a search and rescue worker locate you more easily. Also, staying calm and paying close attention to your physical condition is key. "Maybe you haven't paid enough attention to your feet or the fact that you're sweating and getting wet, and all of a sudden, you find yourself in the worst situation. You find yourself soaking wet, exhausted, you've depleted a lot of your internal energy stores and maybe you've even gotten yourself further from where you were originally, which might have been a better rescue location. So certainly take your time," Martin says. "Staying put is always an option that you want to consider...and would have been the best choice, but people tend to want to be active and move around. There's a lot to be said about not making a bad situation worse."

If it looks like you're going to be spending the night under the stars, Martin recommends building a snow cave, snow quinzee or other similar structure for shelter. "That's a way to really get out of the elements and in an insulated environment," he says. "You can stay warm and you can stay dry. In a snow shelter you can have a nice temperature of just above zero degrees, which is very comfortable."

Even if you only intend on going into the woods for a few hours, plan as if you're staying for a night or two. Packing extra food and water is essential. Here in this province, water is usually readily available all times of the year (though it's not all potable, and you should carry purification tablets with you). However, if you are nowhere near a pond or river, you can use a portable stove or heat a pot over an open fire to melt snow to drink. You can also fill a water bottle or another container with snow and place it inside your coat or sleeping bag to melt overnight. Never eat snow to stay hydrated, as this will lower your body temperature and increase your risk of hypothermia. "Eating the snow doesn't work because it takes a lot of energy to melt the snow itself," Martin adds. "Because snow is about 80 per cent air, it would take a lot of snow to accumulate just a little bit of water in your body."
MORE ARTICLES
load more