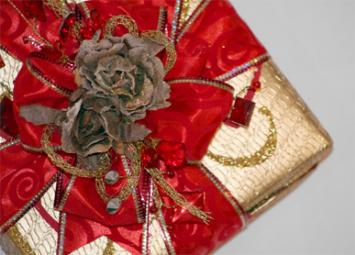 Want to shake things up this Christmas? There's no better way to have some good old holiday fun than by stealing a Christmas present from your grandma, or by grabbing a gift from your boss. Also called "Yankee Swap," or "White Elephant Gift Exchange," playing Thieving Secret Santa is a fun way to exchange presents that is guaranteed to get people laughing. Here's how to play:

Name Your Price
Prior to the gathering, set a price range for gifts. Depending on the group, gifts can range in cost from $5 and way up. After all, with this exchange, it's the game itself that is the most fun. Walking away with something you really want is an added bonus.

Get Wrapping
Each person playing Thieving Secret Santa must bring an anonymous wrapped present - so, no "to" or "from." All presents should be placed together on a table or in the centre of a room.

A Numbers Game
Tear up a sheet of paper into several tiny pieces. Write a number on each, according to how many guests will be playing the game. (If 20 people will be playing, number pieces of paper 1-20.) Throw all numbers into a hat and have each individual draw a number. Then, start hoping and praying that you get the coveted No. 1 spot - and the pick of all the presents in the end.

Start Swapping!
The person who drew No. 1 gets to pick the first present from the pile. He or she must open the present so all those playing can see what it is. Next, No. 2 may decide to a) steal the present from No. 1 or b) pick a gift from the pile. If No. 2 steals, then No. 1 gets to choose another present from the pile. Then, when play turns to No. 3, he or she may choose to steal either of the two opened presents, or try their luck with an unopened present, and so on. Thieving Secret Santa really heats up when one gift is popular with several people. The gift may be swapped several times, or you may choose to set a limit on the number of times a gift may be stolen. (If the limit is three times, than the third person to possess the coveted present gets to keep it.) Once everybody playing the game has opened a present, play turns back to lucky No. 1, who may choose to keep the present they currently possess - or choose one from all of the presents (except for those gifts that have been swapped the maximum number of times).

The person they steal from gets the gift that No. 1 already had but chose to swap!

Question! At the end of the game, if #1 chooses to steal, what gift does the person they steal from get? We've needed agreed on exactly how to end the game. Help!