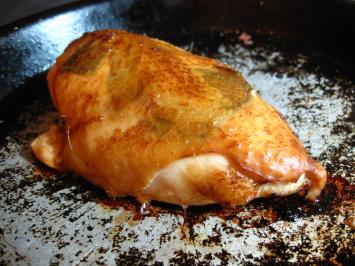 In a large pot, bring brine ingredients to a boil. Let cool. Refrigerate turkey in brine for at least 12 hours. In a bucket, soak 2 cups of apple wood chips in water for 12 hours (reserve the other 2 cups of dried chips).

When ready to smoke, remove turkey from brine and pat dry with paper towels. Pull back the skin of the turkey and stuff fresh sage leaves under the skin. Place turkey in a small roaster or foil pie plate. Drain soaked wood chips and mix with 2 cups dried wood chips. Wrap chips in aluminum foil, poking a few holes to let the smoke out.

Preheat barbecue to 400°F. Put wood chip package on grill and close cover until smoke starts to appear. Reduce heat to 275°F. Keep chips on one side of the grill and place turkey breast in roaster on the other side. Keeping the BBQ on low, smoke turkey for about 1 1/2 hours, or until internal temperature reaches 175°F.