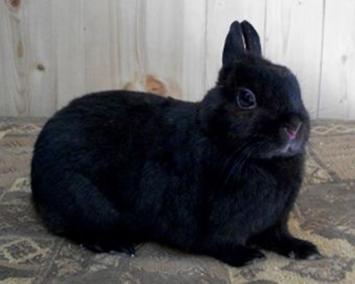 This is just one of many rabbits rescued by the Bird and Small Animal Rescue in Lethbridge, Newfoundland. Think a rabbit might be the right pet for you? Read these tips for prospective small animal owners to make sure.
Each year in Newfoundland and Labrador alone, many creatures (from cats to rats to lizards) wind up in shelters where their fate is often euthanasia - usually because the animal didn't quite fit the owner's lifestyle. Don't make your future pet a statistic. Thinking about purchasing or adopting a beagle? A greyhound? A small animal? An exotic animal? Local animal rescue organizations share what you should expect from specific breeds/species.

Small Animals Require Big Care
Just because rabbits, guinea pigs, hamsters and other little critters are smaller than the average cat or dog, that doesn't mean they require less care. Downhome recently spoke with Anne Marie Brown, founder of Bird and Small Animal Rescue (located in Lethbridge, Newfoundland) to find out what prospective small animal owners should know before they purchase or adopt. Click here to view a slideshow of hamsters and rabbits waiting to be adopted from the Bird and Small Animal Rescue.

'em
Many people associate spaying and neutering with cats and dogs. But the simple surgical procedure is a must for pet rabbits, as well. "Unspayed female rabbits can be quite aggressive. Once they come into heat or come of age, we'll say, they can start biting and boxing you, and get really protective over their cages. Usually once you have them spayed though 99 per cent of them will give that up. With males, they'll spray. Tomcats spray, well male rabbits do the same thing," says Anne Marie.

Look Out, Kids!
An adorable baby bunny might seem like a nice pet for your toddler, but a fully-grown rabbit certainly isn't. "Rabbits are not that easy to handle all the time, like a small kid trying to pick up a big rabbit that's going to kick and scratch...it doesn't work out the way they think when they get the cute little bunny," says Anne Marie.

Clean-up Duty
Sure, you might not have to take your guinea pig or rabbit for a walk everyday to let them relieve themselves, but cleanliness is still an important task. "I stress to people that they do require a fair bit of cleaning out. I mean, they're not very big but they do poop and pee a lot," says Anne Marie.

Room to Breathe
Most pet stores offer a variety of cage sizes for critters like guinea pigs and rabbits, but Anne Marie cautions that some do not offer an appropriate amount of living space. "You go in there and you see a rabbit starter kit or a guinea pig starter kit and to me the cage is only a litter box...I guess they don't sell all the big cages because they're too expensive for people to buy, but reasonably they shouldn't have anything smaller than at least the extra-large rabbit cage," says Anne Marie.

Visit www.birdandsmallanimalrescue.webs.com to view their adoptable rabbits, or to inquire about adoption.

a Greyhound?
As a result of the breed's background as racing dogs, greyhounds are often misunderstood - seen as wildly energetic dogs that require unrealistic amounts of exercise. Downhome recently sat down with Lynanne Furlong, the NL representative for Greyhound Pets of Atlantic Canada (pictured here with her own greyhound) to get the goods on what greyhounds are really like.

A Little Lazy
"They're nicknamed the 45-mile-per-hour couch potato because they are such a quiet, laid-back, easy-going breed...They're not going to be pulling you down the street, they walk very nicely on a leash," says Lynanne. Greyhounds do very well with a leash walk once a day. And, despite their large size, their laid-back nature makes them great apartment dogs, she adds.

Will Roam Far From Home
It is important for greyhound owners to ensure their dog is kept either indoors or, for short periods of time, in a penned-in area outdoors because, left to roam, a greyhound may wander a great distance. "If you're the type of person who wants to go up in the country and let your dog loose a greyhound is not for you, because they are a sight hound. You can compare them to a beagle and a rabbit - a beagle uses its scent, a greyhound uses its sight," says Lynanne.

Don't Tie Me Down!
While it is never advisable - or even humane - to leave a dog tied on at all times - greyhounds cannot be tethered (except for their daily leash walk) for any length of time. "A greyhound can get up to 45 miles an hour in three strides. They're going to seriously hurt themselves if they try to take off while tethered onto anything," says Lynanne.

Fluffy and Bugs, Beware
Some greyhounds are not small animal friendly, says Lynanne. If you already own a cat, rabbit or other small animal and are interested in adding a greyhound into the mix, let GPAC-NL know. Lynanne says all adoptable greyhounds are tested for their ability to peacefully co-exist with other animals, so they can likely find you a greyhound that will fit in with your whole family - Fluffy and Bugs included!

Want to adopt a greyhound? Greyhound Pets of Atlantic Canada-NL will help match you up with the perfect greyhound for you. Click here for more information.

Need Homes, Too
Beagles have been gravely misunderstood, especially in Newfoundland and Labrador, as dogs that are good for hunting only. Nothing could be further from the truth, says Sheila Lewis, founder of Beagle Paws. These adorable pups need love and attention just like any other dog. Below, Sheila shares more important facts about the breed.

No Pens, Please
Many beagles live their entire lives walking on wire in tiny raised pens in their owners' backyards - deprived of attention, love and affection. Many of these dogs only get the opportunity to stretch their legs during hunting season. Beagles, like other dogs, enjoy the company of a family in a home.

They Follow Their Noses - To a Fault!
"If you're looking for a dog to take in the woods or go on a walk and just stay by you, they're scent hounds, they're going to follow their nose," says Sheila. Like greyhounds (which follow their sight) beagles must be kept indoors or (for short periods) in an enclosed area outside - and use a leash for walking - at all times.

Beagles Love Company
Beagles are a great breed to introduce if you already own another dog. "They are a very social, pack-oriented animal. If they can't have the companionship of other dogs then they want your attention," says Sheila. Beagles generally get along well with kids and the majority are good with cats. Despite their popularity as rabbit hunters, Sheila knows of a few beagles that co-exist peacefully with pet rabbits!

Hardly Howlers
When a beagle wants to, he or she can certainly let out a good, loud howl. So you may be surprised to learn that in general, they are an extremely quiet breed that make for great apartment dogs, notes Sheila. "There's a bit of a myth about their vocalness...a lot of people see beagles just as what they are in their outdoor pens. You walk by and they will howl and howl - because they want your attention...but people think they're noisy because that's all they see," says Sheila.

To find out more about beagles, or to inquire about adoption, visit www.beaglepaws.com.

an Exotic?
Downhome recently spoke with Aamie Gillam, founder of Lucky Lizards, a local rescue for exotic animals. Below are Aamie's tips for those in the market for an exotic animal.

They Eat...What?
Keeping an exotic animal, like a lizard, properly fed isn't as easy as a trip to the grocery store to pick up a bag of dog food. Many of these creatures require weekly supplies of wax worms, meal worms and crickets. And if you think that's enough to turn you off your breakfast, many snakes require mice or rats as a regular part of their diet.

They Like it Hot! Hot! Hot!
And heat can get expensive expensive expensive! Lizards are cold-blooded creatures, so they require heat throughout the year to live. Aamie says owners often don't realize how expensive keeping their exotic pet warm can be until winter, when the extra heat causes their heat and light bill to increase.

Responsibility of a Lifetime...Literally
Before you adopt or purchase an exotic animal, be sure to find out its lifespan. Unlike a cat or dog, which may live up to 15 years, a red-footed tortoise will hang around to watch you raise your kids...and your grandkids. These creatures can live up to a whopping 70 years! "Right now I have two red-footed tortoises, they're only eight years old and they're going to live to be 60 to 70 years old," says Aamie. "If I keep them I will have to put them in my will." One of Aamie's red-footed tortoises, named Tonk, is pictured above.