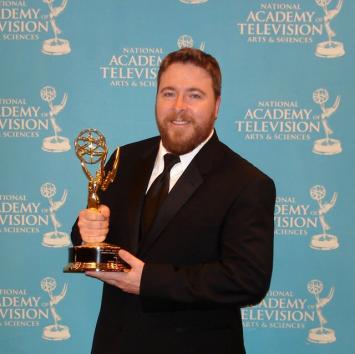 Steve Lambe
Look under any nook and cranny, anywhere in Newfoundland and Labrador, and you'll uncover droves of talented people whose imaginations and creativity seemingly know no bounds. Of course, those involved in the local film and television industry are no exception.

The province is home to some of the country's brightest rising stars. Below are just a few you might want to keep your eye on. Also, from Ricky, Bubbles and Julian to Ron Hynes, get a preview of a couple of local productions you won't want to miss!

Steve Lambe
Have you ever watched those big, Hollywood award shows and wished that you could be the one to walk down the red carpet one day? For Newfoundlander Steve Lambe, this dream recently became reality. A character designer from St. Lawrence, Lambe received a Daytime Emmy award in June for "Outstanding Individual Achievement in Animation" for his work on the Nickelodeon cartoon "Fanboy and Chum Chum." The Daytime Emmy Awards recognize the best of American daytime television programming.

Stephen Dunn
At just 21 years old, St. John's native Stephen Dunn is one the province's brightest up and coming filmmakers. Last year, the film student at Ryerson University was one of a handful of people chosen to participate in the prestigious Toronto International Film Festival's talent lab, where he spent four days working with Hollywood heavyweights like Tilda Swinton (Chronicles of Narnia), Danny Boyle (Trainspotting) and others. As a result of that lab, Dunn created the film Swallowed, a hauntingly beautiful short about a woman who spends her life mourning her husband, who was swallowed by a whale. This year, the film was entered in TIFF's Emerging Filmmakers Competition and while it didn't take top prize, Dunn did receive an honourable mention and the nod for fan favourite and walked away with $15,000 in prize money.

Brad Peyton
Brad Peyton has gone on to big things since leaving his hometown of Gander. Renowned for his 2002 short Evelyn: The Cutest Evil Dead Girl, Peyton recently directed the 2010 Warner Brothers film Cats & Dogs: The Revenge of Kitty Galore, starring the voice talents of Hollywood's elite, including Bette Midler and Christina Applegate. Currently, Peyton is working on the sequel to the 2008 hit Journey to the Centre of the Earth.

The Drunk and on Drugs Happy Funtime Hour
[Pictured L-R: Stabby Brutto (Robb Wells), Don Brutto (Mike Smith) and Sammy Brutto (John Paul Tremblay)].
St. John's-based Pope Productions is bringing the Trailer Park Boys back to life - albeit in a different reincarnation. The company is producing six, half-hour episodes of "The Drunk and on Drugs Happy Funtime Hour," a Showcase sketch comedy starring Robb Wells, Mike Smith and John Paul Tremblay (aka, Ricky, Bubbles and Julian) and featuring Rush guitarist Alex Lifeson as a German scientist who teaches kids about nutrition. The show, which was filmed in Halifax, is due to air February or March of 2011.

The Man of A Thousand Songs
(Pictured: Ron Hynes. Kent Nason photo.)
St. John's native William MacGillivray is no stranger to Atlantic Canadian cinema. Based out of Lunenenburg, Nova Scotia, MacGillvray's latest release, The Man of A Thousand Songs, recently had its world premiere at the Toronto International Film Festival. The critically acclaimed documentary gives an intimate look into the life of local legend and renowned singer-songwriter Ron Hynes. MacGillvray's Picture Plant studios produced the film in partnership with St. John's-based Get Set Films. "It took us completely by surprise," MacGillvray says of the film's success. "And I think the reason is that Ron is so honest and straight ahead in this film that it's very engaging. When he tells his stories about his life, some of them are very funny and some are very sad, and people respond accordingly. We've had many a tear shed in those screenings."