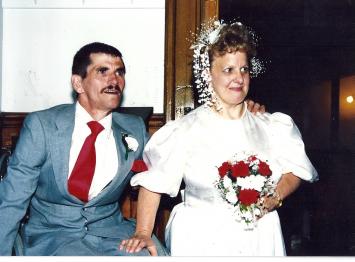 Gordon, my youngest brother, was born with a medical mystery. My parents and the doctor thought he had club foot, but that diagnosis changed after his neck turned to one side and his whole body began to struggle with painful muscle spasms.

Gord was 20 when he first heard of dystonia, a movement disorder that takes over muscle control and holds the body captive. A neurosurgeon in Montreal not only confirmed his condition, but offered to operate on his brain, the cause of his problems. There was little known about dystonia at the time, so this operation was experimental. Had we known the outcome, we might have had second thoughts about the operation.

In the Montreal hospital, Gord was put under local anesthetic before the doctor drilled two holes into Gord's skull and put probes into his brain to control the spasms. His operation lasted more than five hours, with Gord awake the entire time so he could tell the doctor what part of his body was being affected by the probes. Gord was released from hospital a week later and everything seemed great; he could walk straight and had no more muscle spasms. One month later, he suddenly collapsed, his body once again wracked with painful muscle spasms.

My brother went into a depression - who could blame him? After all the suffering he went through, plus the pain of spinal taps and brain surgery, no wonder he was feeling down. But with one chance encounter, his outlook on life was turned around. We were at a Montreal radio station where Gord and others were being interviewed about their various medical issues. Sitting awkwardly across from Gordon was a 16-year-old girl with multiple sclerosis. Her young body was distorted and she was in a lot of pain. During the interview, she revealed she had only three months to live.

Gord knew then that while he had been dealt from a bad deck of cards, his was not the worst card. Dystonia, while a chronic and incurable condition, was not a death sentence.

My brother's attitude changed after that day. He decided that if he was not going to die from his disease, he might as well make the best of his life. He returned to Newfoundland and, though sometimes wheelchair-bound, he found a job at The Hub, which specializes in giving meaningful employment to handicapped persons. Gord worked for 20 years as a dispatcher and in other jobs. He persevered and got his driver's licence. He also fell in love and married a young woman named Gloria from Millertown, who had her own medical problems to deal with, including ricketts and an inherited brain disease. They were married in 1991 and were together until Gord's death parted them.

Gord has always been an inspiration to me. We all need a hero to look up to, and he is mine.

Despite his terrible, debilitating muscle spasms, Gord kept working, bought and paid off his house, took many trips with me and our wives to the Caribbean and Alaska, and to Hawaii with my other brother - always in a wheelchair. One night, Gord and Gloria called me from Nashville, having travelled close to 4,000 kilometres in a 10-year-old van that carried only their wheelchairs and a few blankets. He told me he was then heading out to British Columbia to see my other brother. That was Gord; nothing could stop him.

For the past five years, Gord has attended a Southside Road reunion in St. John's with me and about 16 other guys. We would play darts and horseshoes on the Southside Hills or at the Legion. On a number of occasions, Gord would get out of his wheelchair and struggle up the 45-degree incline to the horseshoe pits, and he would hold on to his wheelchair with one hand and throw darts with the other. Such was his determination.

My brother Gord said a final goodbye to all of us on August 27, 2009. This past summer we again had our Southside Hills reunion and we played darts and horseshoes for two new, special trophies. The Gord Higdon trophies, one for darts and one for horseshoes, will be awarded each year - not necessarily for the best player, but for the most determined player, in memory of Gord.
MORE ARTICLES
load more