Tale of the Ghostly Sail 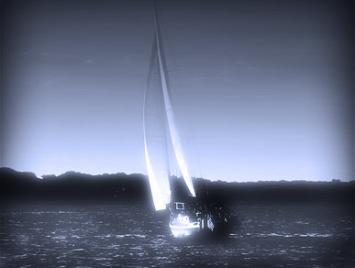 
This is a true story from my youth. I wonder how many people remember it as clearly as I do?

As a boy, I spent a great deal of time with my best buddy, Hal Hunter, in Topsail Pond, where his family had a summer home. Every time the weather was fine, sailboat owners would take their craft out on the water. Hal and I would sit on the shore wishing we had a sailing boat of our own.

Every so often we'd watch an elderly couple sail up the pond in a gleaming white boat, sails billowing in the wind; it would silently sail by us like a majestic queen of the sea. Hal and I wondered how a couple obviously well up in years could maneuver a sailboat so effortlessly and easily - eventually we found out, to our dismay and disbelief.

One day, Hal and I were exploring a remote part of the Topsail Pond shoreline when we stumbled upon a most unusual sight: the rotting remains of what had once been a sailboat. On the stern, we could just pick out the name Emma. "I wonder how long that's been here?" Hal said. "I don't know," I answered, "but the name Emma is strangely familiar; I just can't place it."

When I told my dad about finding the wreck, he didn't seem surprised. "You and young Hunter stumbled on a well-known but little-talked-about story, Son," he said.

"The old couple you've seen sailing on Topsail Pond were Elias and Emma Osmond. Mr. Osmond was a retired trawler captain, and both he and his wife loved being on the water. After his retirement, the Osmonds settled in Topsail Pond, bought a sailboat and spent as much time out on the water as they could; he named it Emma after his wife. One day while on the pond, a sudden gust of wind caused the yardarm to swing about. It hit Mrs. Osmond, knocking her overboard; he jumped in to save her, but he was an old man, and quickly became exhausted. Sadly, they both drowned. Their sailboat drifted and grounded where you and Hal found it. That was many years ago."

That was where I had seen the name Emma - it was painted on the stern of the boat Hal and I used to watch sailing up the pond. My father never lied to me, and as incredulous as it sounds, I believed him. I haven't been back to the Topsail or the Conception Bay area in years. Do sailboats still sail on the pond, especially that of Elias and Emma Osmond?
MORE ARTICLES
load more