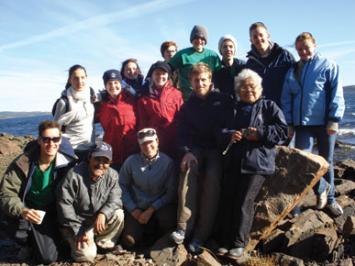 Katimavik offers youth aged 17-21 an exciting six-month journey of discovery in two or three different regions of Canada. The program is based on the concept of service learning, which integrates both personal and professional development through volunteer work and group life. It focuses on five components: developing leadership skills, official languages proficiency, protecting the environment, cultural discovery and a healthy lifestyle. At the end of the program, each participant will have contributed an average of 900 hours of volunteer work - 35 hours a week - for non-profit organizations. Since 1977, more than 28,000 young Canadians have participated in the Katimavik program.

The August "Katimaversary" at Rigolet showcased the community projects accomplished by the youth volunteers, highlighted some of the unique cultural experiences participants received while living in Rigolet and recognized the many efforts of community partners.

"This is the first year for the 'Cultural Discovery and Civic Engagement' themed program across northern communities in Canada and its success in Rigolet is a testament to the hard work of everyone involved," says Rigolet project leader Kelsey Tonner. "It is truly staggering what 50-plus young Canadians can accomplish in a small community when volunteering for a year straight!"

Rigolet AngajukKâk (mayor) Charlotte Wolfrey states, "The Rigolet Inuit Community Government was very impressed with all of the Katimavik volunteers over the past year. The young people that came here embraced our lifestyle, were eager and willing to volunteer, and they left a number of lasting legacies and friendships that will flourish across the many miles of our country."

Just a few of the many volunteer initiatives over the course of the year included painting the community church, cleaning up the boardwalk, supporting the Northern Lights Academy breakfast program, contributing to the town recreation programs, creating a homework club and supporting the community senior's group. In the final month of the program, participants erected new flagpoles and a town bulletin board, grassed the community field, constructed community gardens and supported the annual Rigolet Salmon Festival.

Highlights of cultural experiences included attending an Inuit Elders Gathering; carving antler rings; trying their hand at grass weaving, moccasin making, drum dancing, Inuktitut and throat singing; tasting local bakeapple and redberry sweets, arctic char, salmon, trout, caribou, moose and seal. In addition, there were a number of one-week or weekend billeting opportunities where volunteers were integrated into the homes and lives of families in the community.

Due to the overwhelming success of the project, Katimavik is looking at returning for a second year in Rigolet starting in December 2010.
MORE ARTICLES
load more