Welcome to the Grassy Place 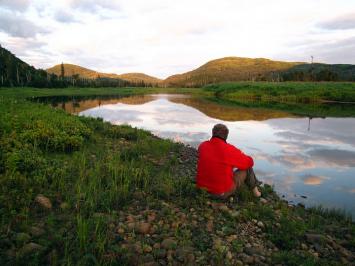 After a 30-kilometre drive over rough road, followed by a strenuous four-hour hike, Aiden Mahoney found himself standing in the middle of nowhere at the edge of a hidden paradise.

The Grassy Place, named locally for its incredibly tall, waving grasses, is considered an ecological oasis by conservationists and is located in southwestern Newfoundland in the Robinson's River Valley.

"It's like a park in the middle of the wilderness," says Aiden, a member of the Bogwalkers, a local hiking group, who made the trek there for the second time this summer. "It's hard to describe in words."

Aiden says the 3,640-acre area appears completely untouched by the human hand - a rare gem these days. It is teeming with wildlife: woodland caribou, bear, moose and the endangered pine marten have been known to frequent the area.

"I'd say that's almost as pristine as when Newfoundland was made back millions of years ago," Aiden gushes. "There's no human footprint in there at all."

The area, which was granted in the early 1900s to three English business partners who migrated to Newfoundland, was originally used for sheep farming. Lying dormant today, it still remains in the family of one of those partners, the Pawletts - but this is about to change.

Eager to see the land protected into the future, the Pawlett family approached the Nature Conservancy of Canada (NCC) - a private, non-profit organization that protects Canada's diversity through the purchase (or donation) of ecologically significant lands - about buying the land, and the parties came to an agreement.

"We protect by virtue of being the landowner," says Douglas Ballam, program manager of the NCC's Newfoundland and Labrador branch, who admits he'll be celebrating when the deal officially closes next March.

What this means for the Grassy Place, which contains the most extensive example of natural grasslands in this province, is that no building will occur on the land, no roads will be constructed, and no trees will be cut, says Douglas, adding that more traditional activities such as camping, hiking and even hunting will be permitted.

"Once we acquire a property we don't put a bubble around it and keep people out," says Douglas. "That's exactly one of the reasons why we do what we do, so that there's green spaces for kids and youth groups and community groups to appreciate nature and learn about their backyard."

Douglas has only visited the Grassy Place once, but its beauty has left quite an impression on him.

"Picture yourself flying like a bird over those flat-topped mountains (of Newfoundland's west coast). The tops of those mountains are usually yellows and browns and greys and they're completely treeless, they're barren. And then all of a sudden the mountain drops away, sheer down into this brilliant green valley and your eyes take a minute to adjust, it's that spectacular," he says.

The NCC has committed to raising an additional 15 per cent on top of the agreed-upon price of the land to create an endowment fund. The organization will draw upon the fund's interest to manage the property and ensure it's kept pristine in the years to come.

And Aiden couldn't be happier.

"When we knew that the NCC was going to take this over we said, 'Wow, great stuff,' because now it's going to be protected forever."

As of September 2010, the NCC still had $200,000 left to raise to acquire the Grassy Place. Want to contribute to the cause? Contact douglas.ballam@natureconservancy.ca