Adventures on the Molly Bawn 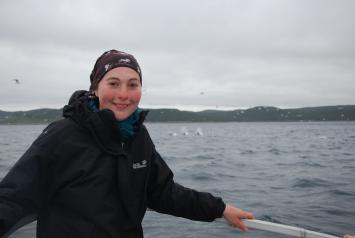 Jeannine Winkel aboard the Molly Bawn the day of the orca attack. Tina Schoenwetter photo.
By Ashley Colombe

"A fin whale, a fin whale! Look, over there!" exclaims the young tour guide in her thick German accent. It's a flurry of activity as passengers clamour to get their cameras poised in time to capture the graceful, glistening body of the majestic mammal surface briefly beside the boat before slipping effortlessly out of sight, into the deep blue waters of Witless Bay.

For many of the passengers, after all, seeing a whale is a once-in-a-lifetime experience - definitely a "Kodak moment." And their enthusiasm is exceeded only by that of their tour guide, who, despite being out on the water with these creatures every day, can't hide her exhilaration at the sight.

If you stepped aboard the Molly Bawn tour boat in Mobile, Witless Bay, Newfoundland this summer, you are familiar with Jeannine Winkel and her passion for the sea and its elusive creatures. The 27-year-old biologist who hails from northwestern Germany wound up in Newfoundland this summer partly by chance. Jeannine, who attributes her interest in marine life to childhood summers spent near the ocean in Spain, was looking for seasonal work on a tour boat somewhere in Canada, and Mike Shortall, skipper for Molly Bawn Whale and Puffin Tours, happened to be in the market for a new guide. But when she arrived in the province in June to start the summer job, she had no idea what was in store for her in the months ahead: making "friends" with a humpback, a media frenzy, and a world-renowned orca whale sighting that will likely be studied by scientists for years to come.

Passion for Marine Life
Besides meeting Jeannine, if you took a tour on the Molly Bawn this summer, you've probably also met one of her closest friends - but he's not what you'd expect.

"He is a big humpback whale, most likely male," says Jeannine. "Whenever we happen to meet him out there, he comes really close to the boat, we just stop the engine and he swims around us, dives underneath, puts on a tail-slapping show."

Jeannine can tell him apart from the other humpbacks because of his distinct markings - and his friendly nature.

"One time he was swimming next to the boat again and I leaned over...and then he came up, very slowly, as if not to scare me away. He came closer and closer, until my face and his snout were only a metre away from each other before he went down again, without spraying me...An unbelievable and moving moment. How friendly these beings are, even though we've hunted them almost to extinction for decades," she says.


Watch footage of the friendly humpback whale, plus other highlights from Jeannine's summer working on the Molly Bawn.

This amazing experience is eclipsed only by one other encounter Jeannine had on the water this summer: witnessing the much-publicized orca attack that occurred in Witless Bay in August.

Witnessing Nature in the Raw
"I so wanted to see an orca because I'd never seen one before," says Jeannine. So after hearing orcas had been spotted in the area, she and Skipper Mike steamed away from the dock with two tourists aboard. Jeannine was excited, anxious for the chance to catch a glimpse of the beautiful whales, which are rarely spotted around Newfoundland. The first sign that they were getting close was a small, panicked porpoise, which sped by the boat. She assumed then that something bigger - perhaps an orca - might be close behind.

She was right. Soon after, she spotted the fins of the orcas dancing atop the water. And before she knew it, the creatures, swimming fast, had made their way past the boat. Keeping up with their incredible speed was almost impossible, says Jeannine. Then, all of a sudden, the orcas "started splashing around in the water, splashing their tails on the water's surface, screeching, and we didn't really know what was going on. Maybe they were playing around, having some fun," she says she thought at the time. But then she noticed the orcas, consisting of two pods (about 15 whales total), were surrounding a minke whale - and they were moving in for what looked like a classic game of cat and mouse.

"It was quite brutal to watch; they don't make it nice and quick...It was impressive to see how coordinated it was, almost everybody seems to have his role in the hunt. Two of them would always be next to the minke and wouldn't let him go. They were so organized as if they would - well they probably did - communicate exactly how they would do it," says Jeannine.

During the ordeal, the orcas ripped flesh from the minke's body as it tried to get away; attempted to drown the mammal by pressing it underwater, preventing it from surfacing for a breath; and finally, bit off part of its tail to hamper its ability to swim.

The two passengers onboard - tourists from the Ukraine - seemed fascinated but shocked at the sight, Jeannine recalls. She explained that this was just a part of nature and that they should feel privileged for having the opportunity to watch it unfold.

As a scientist and a nature lover, Jeannine's feelings about witnessing the incredible attack were mixed. As a scientist she was honoured to have had the rare opportunity, but playing in the back of her mind were images of her friendly humpback whale and the special moment they'd shared. And she couldn't help but feel afraid for him.

"It would have torn me apart to see the orcas attacking him, as much as I know that that's part of nature. Luckily, he never showed up that evening," she says.

When the Molly Bawn turned to head back to the dock to pick up the next group of people, the attack was still underway and the minke was growing weak. By the time the Molly Bawn returned, the minke was no longer visible, though the orcas were feeding on pieces of the whale's meat.

Telling her story
The days and weeks that followed saw Jeannine relaying the details of what she witnessed to local experts and the media, satisfying the public's hunger for her first-hand account of this whale of a tale.

"It's fun. I never expected that and people start recognizing me when I walk around. It's a weird feeling," she admits. "The only thing I really hope I'm getting from that is getting another work permit after my current one runs out so that I will be able to do this again next summer."

Jeannine, who says she's not much for the city, admits she has fallen in love with Newfoundland in the short time she's been here - with its small fishing communities and laid-back way of life. She even likes the fog, she jokes.
And Jeannine would like to return not only for the dwellers of the sea here, but also for the dwellers of the land.

"I like the people here, they are so friendly and hospitable and right from the beginning I just felt like being part of a family," she says. "That's pretty special. I've been in lots of parts of Canada before and I like the people there, too, but Newfoundland is another level of friendliness."