In the Event of a Natural Disaster 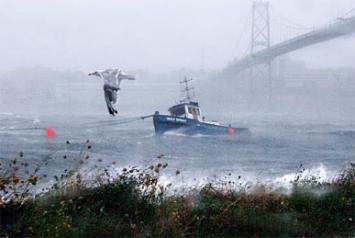 When disaster strikes, making it safely through a hurricane, earthquake, tornado, storm, flash flood or other catastrophic event may only be part of the challenge, according to CSA International, a leading testing and certification organization. Many storm-related fatalities and injuries can occur when people return home to assess damage and begin repairs.

Following the earthquake in Ontario and Quebec earlier this year, CSA International issued disaster recovery tips, which may also be of help to those of us coping with the aftermath of Hurricane Igor.

Before Entering a Building
Ģ Return home only when advised by local authorities, obey all emergency personnel instructions, and be prepared with properly certified safety apparel and equipment. Basic items should include protective footwear, gloves, headwear, eyewear and protective masks; first-aid kit with antiseptic wipes; portable battery, solar, or crank-operated radio; clean drinking water; and flashlight or glow sticks.
Ģ Before approaching your home, check the surrounding area for hazards such as downed power lines, debris or other dangers. Mark and report any hazards or hazardous goods to local authorities. All power lines should be treated as live - never touch them.
Ģ Examine the home's exterior for gas leaks. If possible, turn the gas off at the meter.
Ģ If you can access your main electric box without going through standing water or entering the home, turn off the main breaker. If the gas or electrical controls are inside the building, turn them off only after it has been deemed safe to enter by qualified emergency personnel or a building inspector.
Ģ Check outside for obvious structural faults. Do not enter if serious structural damage is evident or if you have doubts about the safety of the building.

Once Inside a Building
Ģ Upon entering, move slowly and carefully while watching for hazards. Beware of jammed doors, sagging ceilings or floors that suggest structural collapse. Leave immediately if you hear shifting or unusual noises.
Ģ Do not operate gas or electrical appliances until they have been dried, cleaned and inspected. Replace only with certified equipment.
Ģ Check chimneys and vents for dirt, debris and leaks before using wood-burning or gas appliances. Any blockages may lead to unsafe or fatal levels of carbon monoxide in the home.
Ģ Check for broken, leaky or shifted water and gas pipes and lines before use.
Ģ Exhaust from fuel-powered generators, pumps, barbecues, camping stoves and fuel-burning equipment is dangerous within confined spaces. Never use such items indoors or in an attached garage. Using battery-operated, certified carbon monoxide alarms can alert you to dangerous levels of gas.
Ģ Beware of standing water inside and outside the home that can act as a breeding ground for micro-organisms, such as viruses, bacteria and mould. When floodwaters have sewage or animal carcasses present, infectious disease is an added concern. Do not use contaminated or potentially contaminated water for cooking or washing.
Ģ Everything that has been touched by floodwater should be cleaned and disinfected. Materials that cannot be effectively cleaned, such as carpeting, mattresses and stuffed toys or furniture, should be discarded. Remove and discard wet wallboard, drywall, gypsum and insulation. Start the drying process as soon as possible by opening all windows and doors to circulate fresh air inside the home. Use fans and dehumidifiers to aid in the drying process.
Ģ If your basement remains flooded, removing water too quickly from your basement may put pressure on your home's outer walls and significantly damage or collapse your foundation. Drain your basement slowly and carefully only when standing water outside the home is no longer visible on the ground.
Ģ Heating and air conditioning ducts may have mud or debris, requiring cleaning and disinfecting.

Generators and Tools
Ģ Use generators carefully and always follow instructions, ensuring your generator is rated for the amount of electricity you will need. To prevent shock, the generator must be properly grounded. Only use generators or tools that have been tested and certified by an accredited organization, such as CSA International, and always follow manufacturer's instructions.
Ģ Do not connect a generator directly to a home's wiring, which could send high-voltage current or "backfeed" to outside power lines connected to your house. Backfeed could be fatal to electrical workers, neighbours or anyone who touches the power line and may cause additional damage to your home.
Ģ To prevent fires, never refuel a generator while it's running or still hot and keep an appropriate fire extinguisher nearby at all times. Be sure to store fuel containers outside and away from buildings or combustibles.
Ģ If you must use an extension cord, ensure it's certified for outdoor use and check it often for overheating. Do not attach multiple extension cords.
Ģ Consider using portable solar panels and battery units for smaller appliances.
Ģ Do not use electrical tools in wet locations and make sure all tools and appliances are properly grounded and double insulated. Mud or dirt in a grounded outlet may prevent the grounding system from working and lead to electrocution. If unsure about the condition of a grounded outlet, call an electrician.
Ģ Use the electric tools one at a time to avoid overloading circuits.
Ģ Beware of scammers offering counterfeit goods or structural repair assistance. Opportunists often use disasters to take advantage of people in need to make empty promises for repairs or sell fake goods. Be cautious of people selling flimsy or suspect tools and products. Look for a certification mark.