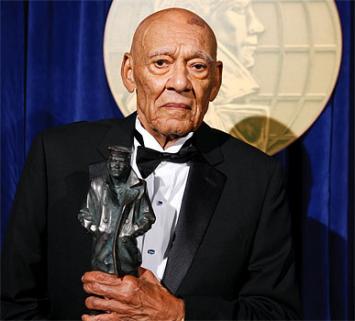 Lanier Phillips accepts his Lone Sailor Award. www.navymemorial.org photo.
On September 15, 2010, Lanier Phillips, the Navy's first black sonar technician, was honoured with the U.S. Navy Memorial's Lone Sailor Award - presented to sea service veterans who have excelled with distinction in their civilian careers while upholding the Navy core values of honour, courage and commitment. Phillips is well-known in Newfoundland as a survivor of the Truxton and Pollux sea disaster that occurred off the south coast of the province.

In 1942, the ship Phillips was travelling on, the USS Truxton, and another ship, the USS Pollux, ran aground during a storm. Phillips was one of the lucky few to survive the tragedy - but at the time he didn't feel so lucky. Because of the colour of his skin, Phillips was terrified that those who rescued him would eventually turn against him. Instead, the people of St. Lawrence, Newfoundland treated him with a kindness and compassion that Phillips, accustomed to racism in the Deep South, had never known before. The compassion, instead of repression, that Phillips encountered in St. Lawrence led him to fight against repression later in life, and he eventually marched alongside Dr. Martin Luther King.

For more information about the Lone Sailor Award and its recipients, click here.

Hooray for Lanier.I am a survivor from the Pollux AKS-2, which was wrecked at the same time. We were rescued by the good folks from Lawn, a town about 10 miles south of St. Lawrence. I've met Lanier. He's the greatest! Hubert J. Greene

I remember the story from many years ago. Thanks to the People of St Lawrence. God Bless.