Confessions of a School Teacher 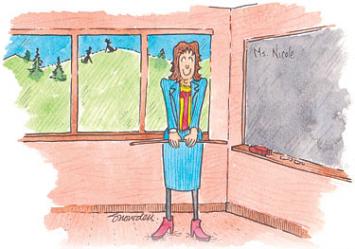 The school year will be starting soon and the time has come to set up my classroom at Northern Lights Academy in Rigolet, Labrador. I will be the grade six/seven combo homeroom teacher as well as the music teacher for all grades (K-12). As I walk into my classroom, my eye is drawn to the wall of windows along the far side of the room. I peer outside, taking in the lush evergreen trees and a cloudless blue sky: the perfect setting in which to encourage eager young minds to embrace the adventure of learning. I can even smell the promise of successful learning in the air (that unique eau de l'ecole that features an industrial cleanser base with top notes of pencil shavings).

I've just finished writing my name on the board with a practiced flourish for my imaginary students when I hear approaching footsteps. The school principal has popped up (quite literally, as she lives in the basement of the school) to see how I've been making out since my arrival. I give "the boss" my well-practiced everything-is-under-control smile as she guides me downstairs to the music room which, to be honest, kind of resembles an old garage, right down to the grey cement floor. The music room also serves as a kitchen and laundry room (yes, the principal does her laundry down here), and I'm thinking that even Julie Andrews would feel a little...stifled in such an environment. Thankfully, however, the confidence, enthusiasm and stubbornness of youth are on my side - my teaching certificate is practically still warm off the printer. Surely I'll have these children kicking the Von Trap family's butt in no time and making those Rigolet hills really come alive.

After tackling a monumental mountain of books, desks, chairs and musical instruments in preparation for the first day of school, I stroll the dusty road toward The Mennonite House, my home away from home. The roads are covered in powdery sand that has me painted a light brown every time a truck or four-wheeler passes by. My hair takes on a life of its own, mopping up sand and flies in its path By the time I get home and face a mirror, I see that I've again taken on the appearance of a street urchin from Oliver Twist. Surely that "Calgon, take me away!" commercial of my youth was made for moments such as these, and so I slip into a tub filled with steaming (though perplexingly yellow) water, my thoughts already on tomorrow and my first day of teaching.

I am the earliest of early birds, so it's practically yesterday when I rise to get ready for school. Having spent my entire life living not merely in the same town but the same house even, I recall a mentor telling me that moving to a new place and starting a new job is like being handed the opportunity to start yourself all over again. As I walk down the empty road to Northern Lights Academy that first day, I find myself humming like Julie Andrews in The Sound of Music:

Somehow I will impress them,
I will be firm but kind,
And all those children
(Heaven bless them!)
They will look up to me, and mind me,
With each step I am more certain
everything will turn out fine...

For those kindred spirits of mine that can sing this song in its entirety, you'll know that there is an "Oh help!" thrown in for good measure, and it's with a similar terror-tinged exuberance that I proceed toward the school, swinging not a guitar but a book bag. Its windows set ablaze as sunrise bounces off glass, the school beckons like a shrine.

As I open the main door, it dawns on me that with one small step over that threshold, I take a giant leap into adulthood - though I do take care to remove my outdoor shoes before doing so, as it would hardly do to break a rule on the first day. I race up the stairs and to the staffroom at the front of the school. There I am drawn to the windows by the most mournful, compelling sound my ears have ever heard. Somewhere in Rigolet, a lone husky has started howling, setting off a chain reaction of "aaaooowwwws," the harmonies of which no painstakingly practiced choir could ever hope to accomplish.

In the months to come I will call my mom often when the huskies start howling like this. Some sensory experiences are so overwhelming that they produce a profound longing to share them with someone you love. Yet as I hold the receiver out the window, I know deep down that much of the sound's vitality is unable to travel the phone line. Some things must simply be lived firsthand; and I count my blessings for having had the chance.