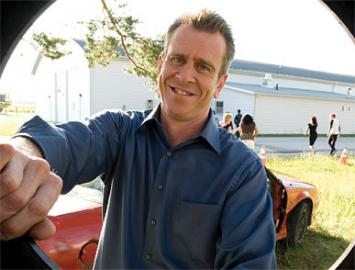 If you've ever watched "Canada's Worst Handyman" or "Canada's Worst Driver," you probably found yourself in hysterics before the show was over. You've also probably been left wondering if the dim-wittedness that saturates the shows was staged.

Host Andrew Younghusband says it's not staged. They are real people who simply have no clue how to do things the right way - but they provide for a masterful piece of reality comedy.

The number one question people ask Andrew about the participants on "Canada's Worst Handyman" is whether or not there are actually people out there who are so inept at handy work?

"They are not acting. They are trying their damnedest," Andrew says. "We had a woman on the show a couple of years ago who insisted that some people have no common sense, that they were born without it and they'll never get it because they can't figure out common sense."

Andrew is in his glee as host of "Canada's Worst Handyman" because he's reliving his own D.I.Y. mistakes through the misfortunes of the participants on the show. At the age of 19, he bought an old house in New Melbourne, Trinity Bay, Newfoundland, for $7,000 - a real fixer upper.

"One of the reasons I'm good at that job is because I've got this house that I've had for 20 years. When I got this house you could put the car keys right in through the side of the building it was that rotten," he recalls. "So, every single thing that's been done on that show badly, I've done worse. So to see those people doing that stuff, that's one of the reasons I get it. It's one of the reasons I relate. I've done all those things, incorrectly. I'm a running joke out here. At the Home Hardware (Hindy's) out here in Winterton, they just laughed their asses off when I showed up. They were like 'How did you get that job?'"

The fact is, while Andrew admits he's qualified for the job based on his own handyman tribulations, his career path was determined more by his flare for the creative, his desire to succeed and his willingness to keep battering until the brick walls fell.

The roots of his career in the arts reach back to his high school days and a teacher named Lois Brown. She pushed him and his fellow drama enthusiasts to extend themselves beyond the curriculum. She encouraged them to go downtown and work at the LSPU Hall (where many Newfoundland and Labrador artists get their start) and to surround themselves with writers and creators. Brown's encouragement fostered ambition in Andrew and his peers.

"We won the high school drama festival in the mid-'80s and I think every other school did some Chekov piece or Shakespeare or whatever kind of play that they knew nothing about or had no relevance to their lives. Lois was always telling us to write, and our show was collectively written by the cast," Andrew explains. "I think that's where I got the real bug." (Though even as far back as Grade 6, he and his friend Sean Panting were performing skits for the elementary school assemblies.)

Andrew remembers when they first started working in the musty rooms of the LSPU Hall under the watchful eye of Charlie Thomas. His sketch group was pounding away at their first show next door to where Codco was writing the first series of its TV show.

"We were teenagers and they (Codco) just thought it was cute and funny and interesting that they had a bunch of teenagers next door to them doing exactly what they were doing - sketches. They befriended us to the point where when I was 15, I was at Tommy Sexton's 30th birthday party," Andrew points out. "So we were really good friends with all those people and that gave us instant street credibility when we were doing a sketch...and there you have Codco standing up in the back. They'd come to every performance we did. And so did the entire downtown art community. They supported the hell out of us kids."

He still looks up to the members of Codco. He also respects Rick Mercer and the work he's doing and "...anybody who's kind of just churning stuff out. I'm impressed by people like Don McKellar that write all the time."

How Andrew got from performing skits in downtown St. John's to writing and hosting his own TV show is tied directly to his ambition and drive. After developing a rapport around town, he picked up a bit of work on local radio. By the age of 21, he had moved on to TV with a weekly gig doing political commentary on the CBC evening news.

"I was always pitching myself around trying to get gigs. I pitched myself to the newscast in B.C., got a job there. From there I started hosting shows. I hosted a show called 'Foodessence' on Life Network, then started working for Undercurrents on CBC," says Andrew. "I was just pitching myself and writing anything I could. I wanted to be an actor all the time, that's what I wanted to do, but I found myself getting more work as a writer and current affairs type person...Every now and again I'd get a job where I was the host, and every time it's happened I wound up taking over the writing responsibilities as well."

Today, at 39, Andrew is the only writer for the "Worst" shows, he oversees the editing and he is the creative producer.

"I was hired just to be the host, just the frumpy kind of host guy, then I just worked my way up through," he says.

When Downhome caught up with Andrew, he'd just finished shooting his sixth season of "Canada's Worst Handyman." While he lives in Toronto, he finds time to enjoy his home in New Melbourne, where he often comes to write and edit, and sometimes gets out for some fishing, hiking or eating lobster on the beach.

Aside from the fact that writing seems easier for him in Newfoundland, he says he comes home because "...it's the best place to be!"