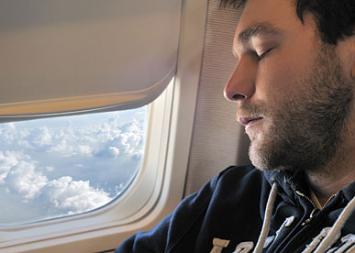 Trips to faraway lands can be exciting and rewarding, but the jet lag caused by long or multiple flights, changing time zones and improper rest can be a drain on your vacation. People generally associate jet lag with a feeling of sleeplessness and fatigue. But the symptoms are wider ranging and can include nausea, constipation, diarrhea, sweating, dehydration, poor coordination, headache and even memory loss.

Jet lag remedies abound, with suggestions for before, during and after your trip. Downhome scoured the Internet for reputable sources and found a number of solutions that everyone seemed to agree on. So here are the most popularly accepted remedies for jet lag.

Before You Go
• Get plenty of rest, eat well and exercise so that you are at your physical best before your travel and your body is better able to handle the stress.
• If you are going to be in a different time zone for more than a week, adjust your routine now so that your internal clock is set on the new time. (eg. get up and go to bed as if you were in the vacation time zone)
• Ask your doctor about the use of melatonin or other sleep aids if you often experience insomnia with jet lag. You should only take such medication with your doctor's advice.

While You're Travelling
• Wear comfortable clothes and shoes if you will be in them for a long time. Or pack fresh clothes in your carry-on luggage and change in the airport between flights.
• Avoid alcohol and caffeine right before and during your flight. They both cause dehydration and disrupt sleep, and caffeine may increase nervousness.
• On long flights, get up and walk the aisle occasionally, when it is permitted, and try not to nap for more than one hour at a time.
• Drink plenty of water to keep hydrated; dehydration can cause headaches and nausea.

At Your Destination
• Adjust your watch to the local time as soon as you land, and spend the day on the new time (eg. eat lunch at the new lunchtime, go to bed at the new bedtime etc.)
• Take short naps during the first day if you're incredibly tired. Try to get at least four solid hours of sleep on the first night in the new time zone.
• Exposure to sunlight can help reset your internal clock and get your body functioning in tune with the current time zone. By the time it gets dark, your body should begin its ready-for-sleep routine.

Do you have any tried-and-true remedies for beating jet lag? Share your advice by leaving a comment.