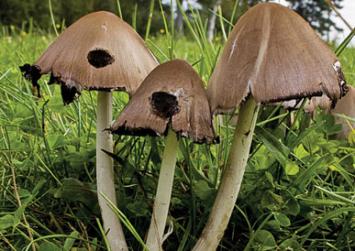 These are inky cap mushrooms that grow in grassy fields near ponds. They are toxic when eaten within a few hours of drinking alcohol, hence its common name: Tippler's Bane.
By Jim Cornish

1. Study mushroom photographs that others have taken. The Flickr photogroup has thousands of images online.

3. Set the camera's mode on close-up. Use a macro lens, extension tubes or close-up filters on a dSLR.

4. Use aperture priority to better control depth-of-field. Use an aperture that best separates the mushroom from its background.

5. Use centre-weighted metering or spot metering so the camera's meter is not fooled by the surrounding light or shadow.

6. Use a tripod or, when shooting at ground level, a bean bag to support your camera. Use a shutter release cable or the camera's self-timer with the shutter lockup option to eliminate blur from camera shake.

7. Clear away some of the leaf litter, branches or grass that might distract the eye.

8. Use natural light, but be prepared for long exposures. Use reflectors (something white like an index card or card stock covered in foil) to add light, or use a diffused flash to fill shaded areas.

9. Revisit the mushroom every day to photograph its ever-changing appearance.

10. Keep your head down. Mushrooms can be very small and are often hidden behind rocks and logs. Miss one today and it may not be there tomorrow or even for the next couple of years.