How to Make Salt Fish 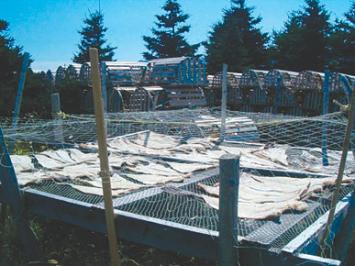 Before the days of refrigeration, preserving food was a lot more complicated than throwing it in a freezer. Smoking meat and pickling vegetables were early methods of storing food for long periods of time, but today they're used more often to add a distinctive flavour to the meal than keep it edible.

In Newfoundland and Labrador, salting was the most popular method of keeping fish until commercial freezers became commonplace. Today, a few people still use salt to give their fish a unique taste that evokes memories of the fishery's heyday, and to maintain a skill that was once the basis of the Newfoundland economy.

The process of salt-curing (also called "making") fish begins with the deboning and gutting of the fish, a technique called "splitting." The head is cut off and the bones are removed with a special curved knife, then the meat is cleaned in water to remove the blood and liver oil. (Photo at left courtesy of Ralph G. Hiscock.)

Next the fish is cured in salt in what's called a "pound" - a square bin where you let the fish soak in salt for about 21 days. If you want a less salty version called "shore fish," you lightly sprinkle the fish with salt and let it cure for only a couple days. (Photo at left courtesy of Cynthia Salaney.)

Normal household table salt won't do; you need solar salt, also known as rock salt. Solar salt is harder to come by in Newfoundland and Labrador than it once was, but you can still buy it from Avalon Coal, Salt and Oil Ltd. in Bay Roberts at $11.30 for a 34-kg bag. Their salt is mined and shipped from the Windsor salt factory in Pugwash, Nova Scotia.

Drying
Once the fish is salted, it's laid on flakes to dry in the sun. Traditionally flakes (platforms) were made of tree boughs, but these days more people use wire-mesh flakes.

Jim Edwards, a fisherman from Fogo, says the best time to salt fish is in the fall because the summer heat can cook the fish right on the flake.

"It's no good to make it in the hot summer," he says. "The fish gets a sunburn. It gets heated, and that's no good."

Take the fish inside at night and during wet weather because water will ruin the fish and delay the drying process. With the help of some sunny weather, the fish should take a week to dry thoroughly. At that point it's good to eat.

People usually soak the fish in water before cooking it to get the salt out. Burt White of Change Islands is a retired fisherman who says salt fish is still a food staple in his area.

"Everyone salts a bit of fish for the winter," he says. "It's a traditional thing. They'll have salt fish and brewis once a week. It still makes for a good dinner."

Burt still salts fish for himself and a few close friends. Salting is more work than freezing, but it adds a distinctive flavour that refrigeration can't duplicate.

Salt-Cured Culture
"Before the age of refrigeration it was all salt," he says. "It was a full-time job. You'd bring it in and salt it, then it would be awhile before you'd catch any more. The women were always making (curing) fish. That was their job, too."

Salt cod was a major trade good from the 16th century to the second half of the 20th. Ships would fill their holds with salt cod in Newfoundland and ship it to southern Europe. Merchants there would sell the fish and buy olive oil and wine for export to England, and from England ship manufactured goods back to Newfoundland, completing a triangular trade that made merchants rich and Newfoundland settlement profitable.

The switch from frozen to salt fish began the decline of the provincial fishery, according to Jim Edwards, who still fishes out of Fogo. Salt fish preserved for longer and you didn't need to keep a freezer going, so fishermen could sit on their catch while they waited for a better price.

"That was the backbone of Newfoundland," he says. "When the salt fish went out, that was the downfall of the fishery. You have to get rid of fresh fish. You could hold out on salt fish."

The process of salting fish has found a new role in the economy of this province. Tourists can still see this historical method of preserving fish performed right in front of them when they visit communities like Change Islands and Fogo. Bert says visitors from away are fascinated to watch him demonstrate a centuries-old skill that has nearly disappeared in the wake of modern technology.

"I give them a tour around, show them the splitting table and where it's all salted," he says. "They think it's all pretty interesting."