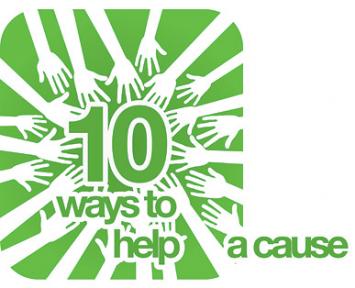 Aside from friendly faces, national pride, love of hockey and ability to withstand the harshest of winters, Canadians are perhaps best known for their generous spirit. According to Statistics Canada's 2007 Canada Survey of Giving, Volunteering and Participating (CSGVP), almost 23 million Canadians, or 84 per cent of residents aged 15 and over, gave money to a charitable or non-profit organization (totalling $10 billion). During the same period, 12.5 million Canadians (46 per cent), volunteered with a group or organization (for a total of 2.1 billion hours - the same as working about 1 million full-time jobs). Here in Newfoundland and Labrador, around 90 per cent of the population made a financial donation to a charitable cause - the highest among the provinces and territories for that year, and above the national average of 84 per cent. If you'd like to get into the giving spirit, here are 10 ways you can help a cause.

Clean up and set sale. Next time you tidy up around the house, gather up all the stuff you don't use anymore and hold a yard sale. Also, ask your creative friends - quilters, knitters, potters, jewelry makers etc. - if they'd like to peddle their wares for a good cause. Donate all profits to the charity, shelter etc. of your choice. You could even have a sale online using eBay Giving Works, which lets you donate anywhere from 10-100 per cent of the sale price of your items to the registered non-profit of your choice.

Do a good deed. If you don't have surplus stuff, sell your services. Visit your neighbours or go door-to-door in your community and offer your help with yard work, household chores, grocery shopping, walking or bathing their pets, washing their cars, etc. in exchange for a donation to their favourite charity.

Show and tell. Get together with friends and make a "hit list" of local celebrities you know - everyone from musicians and magicians to clowns and comedians - and ask if they'd be interested in putting off a benefit show for charity. When booking a venue, ask if they would donate to your cause a portion of the proceeds from the evening's door and drink sales. Advertise the show on social networking sites like Facebook and place fliers in coffee shops, stores and bulletin boards around town.

Take your fundraising crusade online. Websites like GiveMeaning.com let you help your favourite cause with the click of a mouse. After you've signed up as a member, submit a proposal describing your fundraising project and ask your family and friends to vote for you. If your proposal receives at least 100 votes in 30 days, it will be given the green light. Supporters of your cause can make a secure payment directly on the site. GiveMeaning takes care of transferring the funds to the recipient charity and issuing tax receipts to eligible Canadian residents.

Be a conscious clicker. Free click donation websites let you help great causes without spending a dime. On these sites, click the donation button to see a page of sponsored advertisers. When you view their ads, advertisers make a small donation to charity. Charityclickdonation.com has a listing of free click sites and "bulk click donators," which let you donate to several similar causes with just one click.

You can't have fundraising without the "fun!" You can help lots of great causes simply by playing a fun game. For example, FreeRice (freerice.com) is a game where you have to choose the correct definition of a word; for each right answer, the site donates 10 grains of rice to the United Nations World Food Programme. FreePoverty (freepoverty.com) offers a game in which you have to locate a random city or landmark on a map. Each correct answer equals a donation of 10 cups of water to those living in poverty.

Get physical. Consider taking part in a walk/run for charity. Many organizations offer these events each year that use the money you raise from sponsors to help their cause (e.g. Canadian Breast Cancer Foundation's Run For the Cure, MS Society of Canada's MS Walk, and Canadian Cancer Society's Relay for Life.

If you don't got the money, perhaps you've got the time. If you have some free time, call up or visit a charity that supports your favourite cause and offer a helping hand. Many non-profits are relatively small organizations with a limited staff, so they may be able to use your help with anything from doing routine paperwork to tidying up around the office or picking up supplies.

Use your talents for good. Are you a computer wizard? Perhaps you're a gifted writer. If you have a unique skill, chances are there's a charity out there that could use your technical know-how. Offer to repair the charity's computers free of charge, or write press releases for upcoming events or other announcements, or proofread any outgoing correspondence.

Give back. The next time Christmas or your birthday rolls around, ask for donations to your favourite charity in lieu of gifts. If you're throwing a house party, tell guests there'll be a "feel-good" fee to get in. Have a friend "work the door" and collect the donations as a cover charge to attend the party.