Beachcombing with a Professional 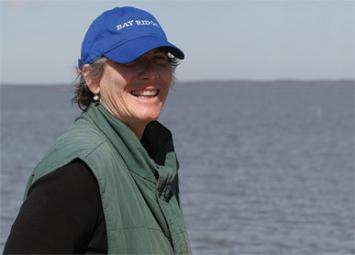 Deacon Ritterbush, author of "A Beachcomber's Odyssey"
By Shawn Hayward

You never know what you'll find during a stroll down the shore. Almost every community in Newfoundland and Labrador is beside a body of water, and most of us have combed the beaches at least once in our lives. For some it's just something to do down by the water, but for others it's a lifetime passion.

"It makes me feel happy and thankful," says Deacon Ritterbush, author of A Beachcomber's Odyssey. "It reminds me that all the niggling problems in life are just that, and I will survive them."

The American writer and anthropologist grew up on Chesapeake Bay in Maryland, and her parents are both from the eastern seaboard. She's been collecting interesting artifacts all her life.

"I can't remember when I never did it," she says. "It was a family activity on our long stretches of beach."

Deacon wrote A Beachcomber's Odyssey as a guide and inspiration for people who like to collect objects they find on the shoreline. For example, she advises that beaches downstream from major population centres are good places to find objects washed up on shore, especially if people have lived there for hundreds of years. Her home on the Chesapeake is beside a major shipping route, and native American history in the area goes back 10,000 years. She's found many historic items on the beach, including 17th century pipes, arrowheads, and medicine bottles.

The best time to beachcomb is two hours after low tide and two hours after, according to Deacon. You can check tide times for your region on the Department of Fisheries and Oceans website.

High winds and waves reveal a lot of beach items, so heading down to the beach after a big storm could pay off big time.

"A lot of the things you see on the beach weren't washed up; they were exposed," says Deacon. "It's been in the sand and the waves take off the layer that's covering it."

An excuse to play
Beachcombing isn't so much about the things you find, but the experience of finding them. Deacon says she gives most of her finds away or leaves them on the beach, keeping the truly special ones in a single box.

"If I ever move, that's the box I take with me," she says. "I'm a big believer that you don't need that much."

Deacon gives workshops and lectures about the benefits of beachcombing for the mind and body. Beachcombing is like meditation, she says. It focuses the mind and reconnects people with nature at a time when we rely on artificial tools like computers more than ever. People who love spending time in nature will be more eager to protect it.

"People don't appreciate what they don't love," says Deacon. "They don't protect it or take care of it. Most of us are so terrible at being good stewards of their planet. But if you fall in love with it, they really care about how the beach environment looks, and they'll collect trash as they collect treasure."

Beachcombing provides an escape that can benefit anyone stuck in the fast pace of modern life, according to Deacon. It conjures memories of a childhood spent enjoying the beautiful scenery of the place where she grew up, and reminds her of the need to protect it.

"I really want to encourage people to play again," she says. "We don't play enough anymore. If I can get people back to that place and time when they were kids and filled with wonder and awe of nature, they'll become better stewards of the world."

Did You Know? In celebration of the multi-coloured pieces of manufactured glass that dot shorelines around the world, Wood Islands, P.E.I. celebrated its second annual Mermaid Tears Sea Glass Festival on July 16-17. The festival is a chance for artists to show off and sell their sea glass jewellery.

Sea glass forms when normal glass shards fall into the ocean and are worn down by years of wave action, giving them a smooth, frosted appearance. Every piece of sea glass is unique, giving sea glass jewellery a one-of-a-kind appeal.

The festival is called "mermaid tears" because the theme is mermaids and any jewellery representing mermaids is welcome.