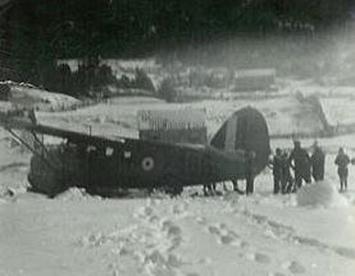 Photo taken by Harris Rideout
What happened when those sent on a rescue mission wound up being the ones needing saving.

It was February 1943. Stewart Pinksen forced his dog team hard as he hurried from Wild Cove, White Bay, to nearby Seal Cove. Time was of the utmost importance. Marjorie Pinksen, wife of Reginald Pinksen, was experiencing complications in childbirth far beyond the capabilities of any midwife. Medical expertise was required immediately.

Dr. Noel Stewart Knapp, a physician of 20 years who had practiced medicine in Lewisporte and Harbour Breton, Newfoundland since his graduation from Queen's University Medical School in 1924, grabbed his satchel and waited for a Royal Air Force (RAF) airplane to transport him to Wild Cove.

Francis Michael Corbett was at the controls of the RAF Norseman that would fly the doctor to Wild Cove. Frank Corbett had first worked as an airplane mechanic in Gander. He was trained as a civilian pilot with the RAF Ferry Command and from 1942 to 1946 he served as a Flying Officer with the RAF Transport Command. His areas of service were Gander, Newfoundland; Montreal, Quebec; North Bay, Ontario; Bermuda; Prestwick, Scotland; and the Azores, Portugal. As the plane climbed upward, the good doctor by his side, Corbett knew full well the adventures and difficulties that could lie ahead. He had many missions such as this under his belt.

Circling Wild Cove, Corbett saw that there was no way to land his aircraft, which was equipped with skis. There was only open water in the cove and no ice at all in sight. His only option was to land the plane in nearby Seal Cove.

Touching down on the rough saltwater ice, the airplane suffered extensive damage as one of its skis was torn from it. As the airplane came to a halt, the smell of fuel filled the cockpit. Corbett, fearing that the plane might burst into flames, hurriedly pushed the doctor out the door and exited behind him.

At the time of the doctor's arrival in Seal Cove, he was met with the news that an elderly gentleman from the community was gravely ill and needed his attention. The doctor faced a difficult decision. Should he tend to the needs of this older gentleman at the risk of young lives at Wild Cove? He quickly decided that the young lives took priority. He was bundled aboard a horse-drawn sleigh and, under the guidance of Frank Pinksen and a few other men from Seal Cove, he headed for Wild Cove.

At a point along the trail they were met by a small group of men travelling by dog team. They had spotted the plane as it circled Wild Cove, unable to land. Knowing the desperate situation that brought the doctor so close, they were determined to make every effort to ensure that the doctor got to the aid of the woman in agony. The doctor joined the men from Wild Cove - the dog team being the faster means of transportation - and within minutes he was at the bedside of the critically ill lady.

With the grace of God, the skilled hands of Dr. Knapp and Marjorie's endurance, twin boys were delivered - more than 48 hours apart. The newborns were named Alvin and Everett.

However the doctor was now the one in a predicament. With the plane having only one wing, he was stranded in a remote part of the province, far from his area of practice. Rather than sit around cooling his heels, Dr. Knapp went about alleviating the pain and suffering of the locals in the Wild Cove and Seal Cove area while he awaited the arrival of another airplane to take him back to his medical station.

The damage to the airplane being so extensive, the initial decision had been to scrap it. But this was overturned and two mechanics were flown in to repair it. Mechanics Tom Dunphy and Harry Young, aided by Frank Pinksen and Sidney Banks who were also mechanically inclined, went about repairing the damage and replacing the skis with wheels.

With planes coming and going fairly frequently, bringing parts for the damaged aircraft and some food supplies, Seal Cove became a beehive of activity by 1943 coastal community standards. This was the time that hamburger meat was first introduced to the locals.

It is said that a two-year-old girl who was prone to seizures became frightened by the sight and sound of low flying airplanes and went into "the fits," as the condition was called back then. She was taken out for medical attention by coastal boat in the care of Elsie Banks. The destination was St. Anthony, but the boat became stuck in heavy ice off Englee. It was there that the little girl passed away.

Another near tragedy occurred when a plane bringing supplies skimmed across snow that had fallen on the harbour. The pilot had mistaken the snow for solid ice; instead it was cover soft, slob ice.

By early summer the plane was equipped with wheels and was air worthy. The ski that had been torn from the plane became a source of useful materials for the locals. The aluminum ski strut was a great source of material for making rings, and the nuts and bolts were reused on other things.

Next came the task of building a makeshift runway. Several people from the community were hired, reportedly for 50 cents an hour (good money 67 years ago) to level any humps, bumps and hollows and to cut tree tops. The makeshift runway was as long as the local terrain would permit, but was short enough so that it raised doubts in people's minds as to whether it would be long enough to allow the plane to become airborne.

The path of the runway went directly across Joseph Banks' potato garden. Banks had been advised not to plant his garden that year as it was supposed that it would be destroyed when the plane sped through it. He had been paid cash for the lost crop, but then he went ahead and planted his garden anyway. It is said he did have a good yield.

Before the first takeoff attempt, the plane was emptied of every nonessential item. It contained only the pilot's seat and had just enough fuel to fly it back to Gander. The plane was positioned at the start of the runway.

A pilot was brought in to fly the RAF Norseman aircraft back to Gander. John Joseph Gilmore was a pioneer aviator, who flew from 1932 to 1945. He served in the Irish Air Corps in the 1930s and had made the first parachute jump in Ireland while still a member of the corps. In August 1940, he came to Gander as an employee of the RAF Ferry Command, salvaging crashed aircraft and returning them to service. In addition, it is estimated that of the more than 500 rescue missions during his time in Gander, he piloted more than half. There was no one more qualified than Gilmore to fly this plane out of Seal Cove.

It was Gilmore's initial intent to make a trial run on the roughly constructed runway, but as he revved the engine and picked up speed he changed his mind and decided to go for it. Barely clearing the trees, the aircraft climbed into the sky and was gone. He successfully landed the plane in Gander that day.
Gilmore was killed on May 1, 1945, when he crashed in foggy conditions on Prince Edward Island, flying this very same Norseman airplane.

Many people in remote areas of Newfoundland and Labrador owe their lives to the bravery and dedication of men like Dr. Knapp, Frank Corbett and Joe Gilmore. No doubt, twins Alvin and Everett Pinksen of Wild Cove feel this way.

Sometime after life in Seal Cove had returned to normal, an airplane flew low over the community. It dropped a bag containing a note from a person who had been involved in either the medical or salvage mission. The note included a hello and a thank-you to the local people for the help and hospitality that they had provided.

The one-time runway is now jotted with homes, most of which are occupied by people who are completely unaware that 67 years ago a RAF Norseman airplane roared along that stretch, concluding a small piece of the history of the community of Seal Cove, White Bay.
MORE ARTICLES
load more