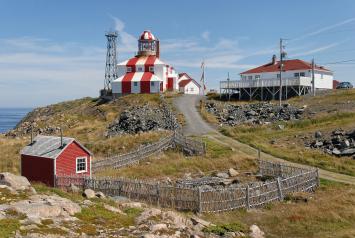 This rare picture, submitted by Leonard Simon of Stephenville, NL shows the lighthouse at Cape St. George, which was destroyed by fire in the late '20s.

The Act came into force on May 29, 2010 as a means to protect federally-owned heritage lighthouses by allowing them to be used for other purposes, as long as they are maintained in a manner consistent with established conservation practices.

Individuals, municipalities or non-profit groups may apply to Parks Canada for heritage designation of any federally-owned lighthouse property. For the surplus lighthouses, a written commitment to acquire ownership and protect the lighthouse must be accepted by Fisheries and Oceans Canada in order for it to be designated under the Act. Potential owners must submit a business plan that shows their proposed use of the property will be economically viable over the long term, and that they have the capacity to manage the property.

In some cases, lighthouses contain aids to navigation, which must remain operational. Parties wishing to purchase these properties would need to enter into an agreement with Fisheries and Oceans Canada, permitting it access to the site for maintenance and operation of the aid to navigation.

Please note that there may be some administrative or legal issues to be addressed in relation to some of these listed lighthouses that would restrict the capacity of the Department to transfer ownership. We recommend that those interested in submitting a petition for a surplus lighthouse contact Andrew Anderson at (613) 990-8886 or andrew.anderson@dfo-mpo.gc.ca for further information prior to submitting a written commitment to acquire a surplus lighthouse.

Guide to Preparing a Business Plan

Directory of Federal Real Property (Treasury Board of Canada Secretariat)

any of them going for buck !