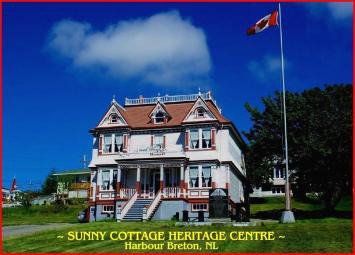 Those visiting the Coast of Bays this summer will have a chance to help ring in a very special anniversary. Sunny Cottage in Harbour Breton is celebrating its 100th year, and tourists and residents alike are invited to take part in the festivities all summer long. Built by local merchant John Joe Rose in 1910, and later inherited by the John B. Stewart family, the beautiful Queen Anne style home - one of the largest and few of its kind in Newfoundland - has been drawing hundreds of tourists each year since the Town purchased it in 1996. The heritage structure is operated by the Sunny Cottage Corporation. Tagged as "100 Days to Celebrate 100 Years," the anniversary celebrations kicked off on May 30 and will continue until September 9. To find out more about Sunny Cottage and the events planned, click here. Tea Room entertainment to kick off the 100th anniversary celebrations for this tourist season.