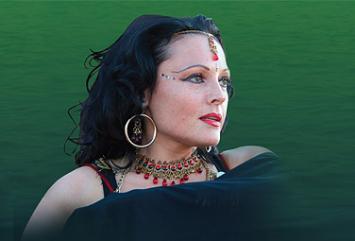 
No one knows when they might get a lifestyle wake-up call, or what they'll say if they answer it. Not until it actually happens.

For Tina Lynnette Baird, the call came during a flash spring snowstorm about 10 years ago, while she was living in northern Ontario.

"I was a single mom... and I had to get from my office to my son's daycare," she recalls. She was at the side of the road with her laptop and her son D'Artagnan, who was about a year old, and "the storm came so fast I couldn't get us home."

A truck driver stopped and asked her, "Lady, where is your family? What are you doing here?"

Tina's family was back home in Conception Bay South, Newfoundland. She had left home at 17 to attend fashion college in Toronto. After working in the clothing industry, she moved north and found work as an aboriginal band manager and a policy analyst.

Not long after her encounter with the truck driver, Tina got another call. This time it was from home and the news wasn't good. Her mother and father were both sick.

She says that was the moment of clarity. "I was like, what am I doing here by myself? I'm really not from here. It's time to go home."

It's been seven years since Tina moved back to Newfoundland, and she is a shadow of her former self - in more ways than one. Once stressed out and overweight, she has lost 100 pounds, rediscovered her love of dance, and created a company that not only supports herself and her son, but also offers support to others through lifestyle and fitness coaching.

Tina's transformation began with visits to the gym and a return to practicing yoga, something her mother had shared with her when she was a child. She was looking for ways to escape the stress in her life.

"The process of losing 100 lbs was not planned at all," she says. "I just realized I needed to live differently. I was not happy and I was not balanced."

Her newly active lifestyle eventually led her to bellydancing, an art form rooted in ancient Egypt. "It's the art of womanhood and the sacredness of femininity," Tina explains. "The world of bellydance is non-competitive, which is great, and it's celebrating the feminine spirit in the masculine world."

About five years ago, Tina was practicing her bellydance routine in the aerobics room at the gym, preparing for a show, when a couple of women happened to walk in on her. Seeing her graceful movements, her rhythm marked by the swish of her hip scarf, they asked if she'd teach them how to do that. She agreed and every day that she taught bellydance, a few more women would join the group. The spirit of the dance, it seems, is contagious.

"Bellydance gives women a forum, a way of expressing their sense of femininity," Tina says. "And for me, it's about being a strong woman."

Eventually the group was large and practiced enough to begin attending dance shows and making other performance appearances. And they earned a name. It came to them on "a dark, cold, rainy March night," Tina remembers.

"One of my dancers at the time, she was a farmer. We had just finished dancing and she blew in. She'd come from the barn and all in a hurry, in a tizzy." Because she was late, she started whipping off her rubber boots, fisherman's knit sweater, jacket and gloves. "Underneath all that was a coin scarf. And I said, 'Oh my God, you saltwater gypsy!'"

The Saltwater Gypsy dancers are part of Tina's larger company, Saltwater Gypsy Lifestyle Services. In addition to bellydance classes and performances, Tina is a certified yoga instructor with the International Yoga Alliance and, as of October 2009, a college graduate in Health Wellness and Recreation Management. This year she is adding lifestyle coaching to her business repertoire.

Perhaps this last credit she's earned - becoming a lifestyle coach to help others find happiness and purpose - is Tina's life coming full circle since that epiphany during a spring snowstorm in northern Ontario. So what would she now tell others out there who want change in their lives?

"If what you're doing right now doesn't work, stop doing it...You can sit and pine away till the cows come home...you can blame everybody for it. But ultimately the power is within you to balance, to change, to improve all of that."